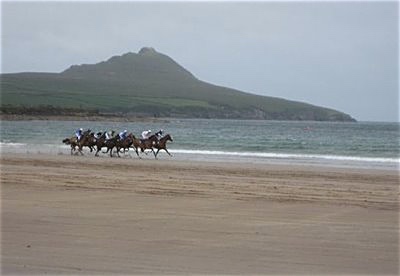 “On a Sunday afternoon years ago we tripped over the hill to the annual races on Beal Ban Strand, an afternoon of thundering excitement up and down the tide-washed sand, sleek and powerful horses ridden by young jockeys in gaily-colored silks. A good time was had by all, but I couldn't help but think of the events that occurred on those cliffs you see in the background of the photograph, just above the head of the jockey in white.

In the year 1580, six-hundred Catholics- Spaniards, Italians and Irish, including women and children- were besieged on a fortified promontory called Dun an Oir, the Fort of Gold, by Protestant troops of Queen Elizabeth I, under the command of Lord Grey of Wilton, assisted by Walter Raleigh. Recognizing that they had no chance of escape or relief, the Catholic forces agreed to surrender their arms, with a promise of mercy. They placed their weapons beyond the outer breastworks. Raleigh called the Irish out, and marched them away to where gallows had been erected to hang the lot. Then, he sent his swordsmen onto the crowded promontory. Blades flashed among the defenseless Spaniards and Italians. When it was over, five hundred severed heads were piled high in a field outside the fort, and in the English camp a hundred Irish men and women hung from beams in a long terrible row. These grisly spectacles would be left to rot when Grey and Raleigh departed, as a salutary lesson to the Papist rebels who would challenge the authority of the English Queen.

When word of the massacre at Dun an Oir reached London, Elizabeth wrote to Lord Grey, "I joy that you have been chosen the instrument of His glory."

There was, of course, more going on at Dun an Oir than religious antagonism, but religion was the armature on which hung the various political rivalries and alliances of late-16th-century Europe. Ireland has had a long and bloody history of religious strife. Only now, as an increasingly secular populace realizes that they have more in common to unite them than to divide them, do they turn their competitive instincts to such entertaining amusements as the headlong horse races on Beal Ban Strand.”
- http://blog.sciencemusings.com/
Posted by CoyotePrime at 1:05 AM