Chet Raymo, “The Cosmography of Myself” 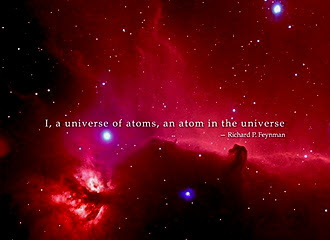 “The Cosmography of Myself”
by Chet Raymo

“It was a common conceit of the Middle Ages and Renaissance to think of the human self– body and soul– as a microcosm, a little world made cunningly of elements and an angel-like sprite, a miniature version of the macroscosm, the universe. So-called "correspondences" linked the microcosm and the macrocosm. For example, each of the seven holes in the human head corresponded to a celestial body- Sun, Moon, or one of the five known planets. Astrology articulated a vast system of correspondences between the peregrinations of stars and human life.

In his book “Religio Medici,” Sir Thomas Brown gave full homage to the microcosm: “I could never content my contemplation with those general pieces of wonder, the Flux and reflux of the Sea, the increase of the Nile, the conversion of the Needle to the North; and having studied to match and parallel those in the more obvious and neglected pieces of Nature which without further travel I can do in the Cosmography of myself. We carry with us the wonders we seek without us: there is all Africa and her prodigies in us; we are that bold and adventurous piece of Nature, which he that studies wisely learns in a compendium what others labour at in a divided piece and endless volume.”

We are inclined these days to dismiss the idea of the microcosm as a quaint superstition, but it was not such a conceit after all. In a very real way, we contain within ourselves "all Africa and her prodigies." The DNA in every cell of our bodies recapitulates 4 billion years of evolution of life on Earth. I share anatomical identities and biochemistry with African elephants and giraffes, 98 percent of my DNA with chimpanzees. My body is a biosystem for bacteria as lush and teeming as the African veldt.

More, every elemental atom in my body, except hydrogen, was forged in a star that lived and died before the Earth was born. We are the very stuff of stars, the detritus of the big bang, the residue of cosmic burning. We are indeed compendiums. The flux and reflux of the sea echoes in our monthly cycles. The conversion of the needle to the north guides the migration of birds. The Sun controls the increase of the Nile and our diurnal cycles of sleep and wakefulness. The Curiosity rover on Mars, 160 million miles away, churns up with its wheels the dust of the Sahara.”
- http://blog.sciencemusings.com/
Posted by CoyotePrime at 9:05 PM