“Explaining Gaza to My Granddaughter” 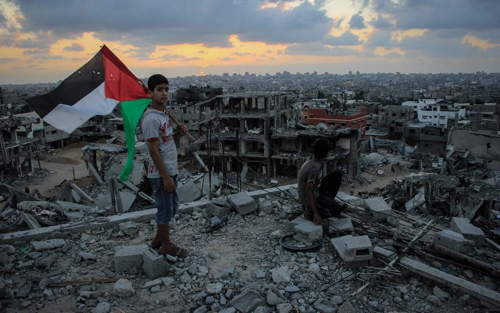 “Explaining Gaza to My Granddaughter”
by Gary Engler

“Grandpa, why are they killing kids in Gaza?”

A deep breath to compose my thoughts.

“You said most people were good, but I think only bad people could drop bombs on little kids. There was a boy crying on TV. He lost his whole family.”

“Most people are good but sometimes they do bad things,” I answered.

Back came the inevitable: “Why?”

“Because of greed and bad ideas. Those are the two main reasons people do bad stuff.”

Her expectant stare caused a moment of panic. She needed an explanation. She needed the truth. But the dilemma in explaining war to a seven year old is that simple answers - “these are the good guys and those are the bad guys” - are part of the problem. Simple answers limit critical thinking and enable those who profit from war to manipulate people.  How could I explain a complicated subject in a simple enough manner that helped my granddaughter learn to think for herself? I had to try.

“You know what Israel is?”

“It’s a country. My friend Sarah went there for a holiday.”

“It’s a country that was started with some bad ideas that seemed like good ideas at the time. It’s a country the greediest people in the world give bombs, airplanes and other weapons to, because these greedy people have the bad idea that they’ll make lots of money and keep their power by doing it.”

The look on her face proved this was far too complicated. Start over.

“Do you know what religion is?”

“It’s like when people believe in god and go to church and stuff.”

“Yes. One religion is called Judaism and the people who belong to it are called Jews. It’s very old and a little bit different from other religions because some people still call themselves Jews even if they don’t believe in god or follow any of the Jewish rules. Through most of their history Jews have lived in places where there was another, more powerful religion and many times the bigger religion picked on Jews. You know, like kids picking on someone just because they’re different.”

“I know. Papa explained that to me.”

“Well in Europe picking on Jews grew and grew until a very bad man named Hitler took over in Germany and during a war his armies killed millions of Jews, including mommas, papas, grandmas, grandpas and little kids. That was called the Holocaust.”

“Yes. It was very horrible and after the war the world felt so bad about the Holocaust that the governments of the most powerful countries said the Jews could have a country of their own where they could run things for themselves. Sort of like giving the kids who have been picked on their own playground.”

“Their own playground far away from the bullies?”

“Exactly, but the problem was that the land which the powerful countries gave to the Jews belonged to other people.”

“How could they give away land that belonged to other people?”

“Well, unfortunately that used to happen a lot. Like right here in Canada when the British and the French fought over land that belonged to the First Nations. Mama and Papa have explained colonialism to you, right?”

She nodded. “That was very bad.”

“This country given to the Jews was called Israel and some people thought it would be the perfect thing to end all the bullying that had happened in Europe, but others were not so sure. Some people said that if you gave land that belonged to other people the only way Jews would be able to keep it would be by becoming bullies themselves.”

“Because the people who lived there, the Palestinians, wouldn’t just give up their homes. Why should they? Palestinians weren’t the ones who had killed the Jews so why should they be punished for bad things Europeans had done? People predicted that the Jews would have to fight the Palestinians for the land and that’s exactly what happened, over and over again. And it’s still happening today.”

“They fight to take the Palestinian land?”

“Are the Jews bullies now?”

“Jews are the same as everyone. Some are bad, but most are nice. Most don’t even live in Israel.”

“You’re right. But are you a bad person when you pick on your sister or have a temper tantrum? No, you’re a nice person doing something bad. It’s the government of Israel, its army, one of the largest in the world, and the police who are bullies. They’re always picking on Palestinians, especially the ones who still live on the land that the right-wing Israelis want for themselves, but that the governments of the world say belongs to Palestine. Of course this makes the Palestinians very mad and they try to fight back anyway they can. When they do, the Israeli government puts them in jail or tears down their houses or drops bombs on them and kills lots of little kids. Then Israel and its supporters says they can’t possibly be nice to Palestinians because all they ever do is fight.”

“I think the Israelis are mean.”

“I do too. But the real question is how do we stop it?”

“How do you stop someone being mean on the playground?”

“By telling the teacher.”

“Sure, but sometimes that doesn’t work. And in the case of Israel telling the teacher is like telling the most powerful country in the world, which is the USA. But the USA keeps on giving Israel all the bombs and other weapons it wants. It suits the interests of the rich people who run the USA to keep everyone in the different countries around Israel fighting amongst themselves.”

“So what do you do if the teacher doesn’t stop someone who is being mean?”

“Stop playing with them?”

“Well that’s what we need to do to Israel. We need to boycott it until it stops being mean to Palestinians, until it allows them to have their own country. That’s the only non-violent way of fixing things. Does that make sense?”

She nodded. “Sometimes when I’m bad, Mama makes me have a timeout.”

“That’s right, Israel needs a timeout. You remember when I took you to the candy store and bought you some but you wanted more. And I made the mistake of listening to you and buying you more? And that still wasn’t enough? You wanted even more? Then you threw a temper tantrum. You hit your sister because she wouldn’t give you her lollipop, even though you’d already eaten yours?””

“Mama said it was because of the sugar.”

She thought about it for a few seconds and then asked: “Grandpa, can you read me a book?”
- http://www.counterpunch.org/
Posted by CoyotePrime at 3:02 PM