"I often discuss systems and systemic collapse, and I've drawn up a little diagram to illustrate a key dynamic in systemic collapse. The key concepts here are stability and buffers. Though complex systems are never static, but they can be stable: that is, they ebb and flow within relatively stable boundaries supported by reserves, i.e. buffers. 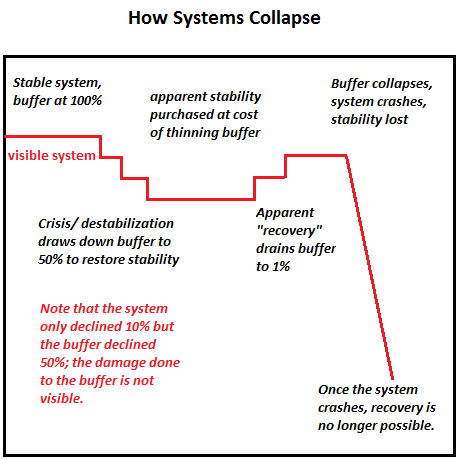 In ecosystems, this ebb and flow is expressed in feedback loops between the weather, environment and plant/animal species which inhabit the ecosystem. Ideal weather/food conditions may spark a rise in an insect population, for example, which then enables an increase in insect-predator populations (fish, birds, frogs, etc.) which then increases the consumption of the insects and reduces the impact of the higher insect population.

Fluctuations within this dynamic generate feedback that tends to reduce extremes and restore dynamic equilibrium.

In the human sphere, ideal weather increases crop yields which then enables a larger human population. When lean years replace fat years, the populace suffers from a lack of calories and births decline and deaths from disease rise as weakened individuals are more vulnerable to infections, etc.

In this example, reserve supplies of water and food are buffers that smooth out periods of want and instability. Suppose the populace depends on a river for irrigation and human consumption (cooking, bathing, etc.). If the river runs low, the populace relies on wells for reserves of water. In good harvests, grain is set aside for lean harvests; the wells and grain stores are buffers which can be drawn down to restore stability to a stressed system.

We all see the surface system, but few see the buffers. The relative abundance of grain is visible to all, but the quality and quantity of the stored grain (the buffer) is only visible to those checking on the stores.

The populace is easily lulled into a sense of false security by a surface abundance. If rodents have eaten much of the stored grain, and the rest has spoiled, few notice. When the river is flowing, few check the quantity and quality of the water in the wells (the buffer).

The buffers are largely invisible and of little common interest in times of abundance. When water and grain are well-supplied, who cares if the stores have spoiled and the well water tastes bad?

A system with thin buffers looks robust on the surface but is highly vulnerable to collapse. In our example, the first lean harvest and low water flow completely drain the reserves, and the second year of drought triggers a collapse of the system: to survive, the populace must abandon the site.

In our complex socio-economic system, the buffers are largely invisible. As a general rule, "money" is our all-purpose buffer: if something becomes scarce and threatens the system, we print/ borrow into existence more "money" which is distributed to buy whatever is needed.

"Money" is itself a system, a system with financial buffers, buffers that have been consumed by the speculative excesses of the private sector and the financial repression of central banks. These buffers are largely invisible; few know what's going on in global liquidity markets, for example. Yet when liquidity dries up, for whatever reason, markets go bidless and asset prices go into freefall.

Flooding the financial system with "free money" only restores the illusion of stability. As noted in my diagram, restoring and maintaining an apparent stability thins buffers to the point of dangerous fragility.

When buffers are paper-thin, a crisis that would have been overcome with ease in the past triggers the collapse of the entire system. Everyone who based their faith in the system on its surface stability is stunned by the rapidity of the collapse, for how could such a vast, apparently robust system implode with so little warning?

The financial system's buffers have been thinning for 10 long years, but nobody seems to notice or care. The quality of risk, debt, borrowers and speculative gambles have all declined, but faith in the "Fed put"--that the Federal Reserve can fix anything and everything by printing "money"-- is quasi-religious: few doubt the limitless power of the Fed's "money"-printing machinery to quickly overcome any crisis.

This is how systems collapse: faith in the visible surface of abundance reigns supreme, and the fragility of the buffers goes unnoticed.”
- https://www.oftwominds.com/blog.html
Posted by CoyotePrime at 1:22 AM