"Peter Schiff: Enjoy The Calm Before The Storm" 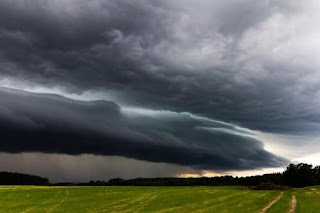 "Peter Schiff: Enjoy The Calm Before The Storm"
by Tyler Durden

"Peter Schiff recently delivered the keynote speech at Vancouver's International Mining Investment Conference detailing why he thinks we are basically enjoying the calm before the storm right now. He talks about the dangerous financial situation the world now finds itself in and tells investors that they should not be too complacent. "We are simply in the calm before the storm and hard times are coming. Prepare now, or rue the day you didn't."

Many people now think the Fed will nudge rates up again in June, leaving six months to get in the much-anticipated third hike of the year and possibly even get in a fourth. The Fed bases its hawkishness on its anticipation of continued strong economic growth and increasing inflation. Peter said they have it half right. Inflation is going to continue to increase. But the central bankers don’t even really have that right. Peter says inflation is actually going to go up faster than projected. The bottom line is that the Fed isn’t going to be able to push through all of these rate hikes.

"The Fed is not going to be able to deliver the rate hikes the Fed is expecting, and again, its the expectation of more rate hikes that is what is keeping the lid on the price of gold. But it’s only a matter of time before the market blows the lid off and the price of gold goes up.” Peter said gold is basically trading sideways right now, in advance of a breakout."

The Atlanta Fed dropped its Q1 GDP estimate twice last week. It is now projecting a 1.9% growth. Peter said that’s probably going to be the highwater mark for the year. "Q1 had all the hype in it, all the anticipation of the tax cuts, the big build in inventories. Despite all that, we’re barely getting any growth in Q1 and because I think we had to pull growth forward from Q2 in order to get a pathetic 1.9, or wherever it’s going to be for Q1, then Q2 is going to be a lot lower because we’ve pulled that growth forward. And that just blows up this whole bullish scenario of 4 or 5% economic growth.”

Of course, the economic growth was supposed to help “pay for” the tax cuts and all of the deficit spending. If the economic growth doesn’t materialize, the deficits will be even bigger. And they are already going sky-high. On top of that, rising interest rates are going to increase the annual payments on the debt. "So, these deficits are blowing through the roof and this is going to be the driving force in moving the dollar substantially lower and moving gold substantially higher.”

Peter said we are on the verge of a giant storm. "We are in the perfect storm, I think, of massive explosion in deficits, not just the budget deficit but the trade deficit, these tariffs or a trade war is only going to compound the problem. We’ve got the economy weakening. We’ve got the dollar teetering on the brink of collapse. We’ve got gold about to break out and the bond market is in the same thing.”

"Right now, everything seems pretty tranquil. The seas are placid. But we are in the calm before the storm. The three major markets – bonds, gold and the dollar – are all moving sideways, getting ready to continue their most recent moves, which for gold is up, for the dollar is down, and for bonds are down, which means interest rates are up – and it’s one, two, three strikes and you’re out.”
- https://www.zerohedge.com/
Posted by CoyotePrime at 1:00 AM