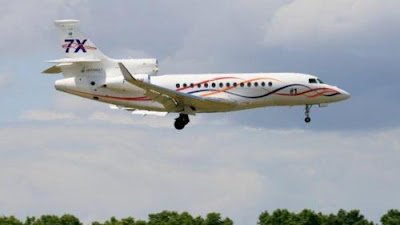 "One would think that by the time you are buying your 4th private jet, you can afford it on your own; well in the case of US televangelist Jesse Duplantis, that's not the case: it turns out Jesse decided to share the burden of his newest toy with his followers, asking them to help fund his fourth private jet because Jesus "wouldn't be riding a donkey".

In other words, Jesse Duplantis said God had told him to buy a Falcoln 7X for $54 million. And while according to BBC he was hesitant at first about the ridiculous purchase, when God told him "I didn't ask you to pay for it. I asked you to believe for it", all his doubts faded away.

While there have been similar ridiculous past requests by tele-evangelists, who prey on the stupid and the gullible, this particular appeal caused immediate controversy, and as noted by BBC, Twitter exploded with many users responding to the request with shock and disbelief, some quoting Bible verses warning against greed and "false prophets", or suggesting that the money could be better used to help the poor; others simply decided to slam the charlatan "preacher."

The belligerent responses, however, did not stop Duplantis: in a video address posted on his website, the 68-year-old explained: "You know, I've owned three different jets in my life, and I've used them and just burning them up for the Lord Jesus Christ. Now, some people believe that preachers shouldn't have jets. I really believe that preachers ought to go on every available voice, every available outlet, to get this Gospel preached to the world."

Standing beside framed pictures of his current fleet, he said that the jet he bought 12 years ago was no longer sufficient for his ministry because he could not fly non-stop, meaning he had to pay "exorbitant" refuelling costs. And what god allows his preachers to have to deal with that... 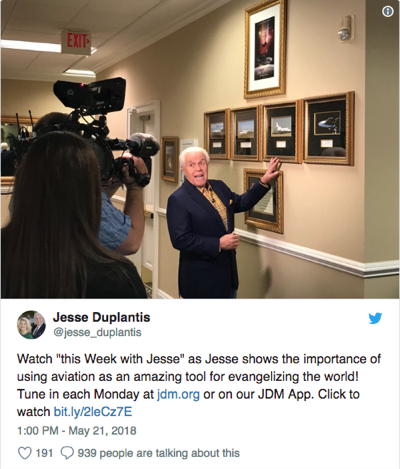 In another picture which appeared in the video, the preacher stands with the three aircraft, above the caption: "It's not about possessions, it's about priorities."*

To be sure, Duplantis came prepared and justified his request by saying that Jesus had told people to "go into the world and preach the Gospel to every creature, now how we gonna do that? I can't live long enough to travel by car or by ship or by train, but I can do it by an airplane".

In retrospect, flawless logic, and we certainly understand his motivation: surely there will be enough idiots within his "flock" who defray the $54 million purchase price; but why the fixation with private Well, in 2015, Mr Duplantis appeared in a video with another preacher, Kenneth Copeland, in which Mr Copeland described travelling on commercial airlines as being "in a long tube with a bunch of demons".

Come to think of it, he may be correct."
-https://www.zerohedge.com/
○
*"It's not about possessions, it's about priorities."
Really? Forget something?
“Jesus said unto him, If thou wilt be perfect, go and sell that thou hast, and give to the poor, and thou shalt have treasure in heaven: and come and follow me. 22 But when the young man heard that saying, he went away sorrowful: for he had great possessions. 23 Then said Jesus unto his disciples, Verily I say unto you, That a rich man shall hardly enter into the kingdom of heaven. 24 And again I say unto you, It is easier for a camel to go through the eye of a needle, than for a rich man to enter into the kingdom of God.”
- Matthew 19:21
○
“Woe unto you, scribes and Pharisees, hypocrites! for ye devour widows' houses, and
for a pretense make long prayer: therefore ye shall receive the greater damnation.”
- Matthew 23:14, King James Bible
- http://biblehub.com/kjv/matthew/23.htm
Reality:
“It was miraculous. It was almost no trick at all, he saw, to turn vice into virtue, and slander into truth, impotence into abstinence, arrogance into humility, plunder into philanthropy, thievery into honor, blasphemy into wisdom, brutality into patriotism, and sadism into justice. Anybody could do it; it required no brains at all. It merely required no character.”
- Joseph Heller, "Catch 22"
Posted by CoyotePrime at 10:27 AM