“Stupid Is As Stupid Does” 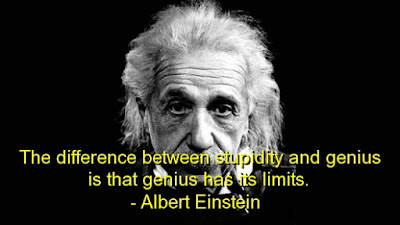 “Stupid Is As Stupid Does”
by Cognitive Dissonance

“The other night, Mrs. Cog and I streamed a movie about an obviously intelligent man (some might say brilliant) who constantly got himself into, and out of, tight spots and life threatening situations. The show was well written and entirely plausible, believable even. In fact, it reminded me of some people I know…and maybe even a little bit of me.

At one point near the end, Mrs. Cog turned to me and quipped, “For such a smart person, he’s really quite stupid”. I quickly rose to the characters defense, claiming it wasn’t stupidity that compelled him to do stupid things, but his huge out-sized ego that drove him into and out of trouble at every turn.

But my answer didn’t sit well with me, similar to a late night meal that sits in the belly rather than digesting. You just know there’s going to be trouble if you don’t promptly address it.

Of course Mrs. Cog was correct; this smart man was consistently doing stupid things. And as Forrest Gump famously said in the movie by the same name…”stupid is as stupid does”. Ultimately we are measured by our actions and not our intent, desire or intelligence. Regardless of our reason, if we’re doing stupid things we can rightfully be classified as stupid.

The truly amazing thing is those of us who act stupid rarely, if ever, recognize our own stupidity, particularly while performing stupidly. I certainly know this to be true for myself. I always have a perfectly logical reason for my stupidity, something I refer back to when I can no longer avoid the stark evidence of my idiocy. After all, one must sooth the ego when all else fails.

Speaking of ego, an honest and frank self assessment of those times when my stupidity runs wild tends to reveal my logical reasons to be mere facades, comforting lies to shield me from being self aware of me and my ego. And even when I am aware of the presence of my ego, ‘it’ convinces me ‘it’ is me. Or should I say I naturally assume it is me who is speaking to me.

To think the voice in my head is anyone (or anything) other than ‘me’ would be crazy. After all, to ‘hear’ or sense anyone/thing other than me in my head would be the very definition of schizophrenia. Since I’m not crazy, that voice must be me.

What exactly is ‘the’ ego? We are informed it is “the part of the mind that mediates between the conscious and the unconscious and is responsible for reality testing and a sense of personal identity.” Our ego is “a person's sense of self-esteem or self-importance”.

So…there is a different part of ‘us’ that ‘we’ are not fully in control of which operates on a sort of independent basis from our conscious mind. Essentially it is a control or ‘reality testing’ program running in the background that has yeah or nay say over our sense of reality and belief system.

Wow! And we think we are free?

All I can say with any level of certainty is if I were someone (or group of some ones) who wished to control the general population, all I would need do in order to shepherd the sheep is to heavily influence the hidden ego residing within everyone. After all, we think ‘our’ ego is ‘us’. So why would we question its motive and process?

Think about that for a second or three.

I claim no deep understanding of the conscious mind nor what (or who?) the ego is. But quite frankly, if there are (mostly) unconscious processes operating in our minds we are either unaware of or mistakenly aware of, I’m not sure anyone can truly understand, let alone trust, what’s happening. Considering some of my worst ideas sprang directly from my ego as perceived-to-be unparalleled brilliance, to assume my ego is my friend and benefactor is at best ridiculous and at worst suicidal. And yet that’s precisely what we have been trained and conditioned to do. After all, it’s normal and natural.

I have often said if everyone in the world were insane, insanity would be ‘normal’ and therefore the prevailing state of insanity would be considered sane. Explain to me how someone immersed within this hypothetically insane world would be able to recognize their insanity, let alone understand what ‘sanity’ actually is?

Most of my musings over the years have attempted to do precisely this, with varying degrees of success and failure I might add. The one thing I do know with reasonable certainty is this; no progress towards sanity can possibly be made if probing (meaning cognitively disturbing) out-of-the-box questions are not asked and an honest attempt made to answer.

Rinse and repeat as often as necessary. Which, based upon my experience, is very often.

In the mean time, for myself at least, I have come to deeply mistrust my ego and tend to think twice (or more) before following the advice that voice in my head is whispering in my ear. Chalk it up to introspection or simply the wisdom of years of experience, but when I feel an intense urge to do or say something, that is the signal the ego program is running and my conscious, deliberate and introspective mind has been switched off and is no longer functioning.

After all, regardless of how intelligent I may believe myself to be, stupid is as stupid does. Just ask Mrs. Cog about my track record if you don’t believe me. :-)”
- https://www.zerohedge.com/
Posted by CoyotePrime at 5:15 AM