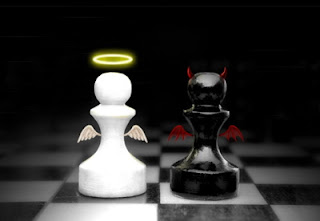 "The Day America Became The 'Bad Guy'?"
by Bill Bonner

YOUGHAL, IRELAND – "There being nothing serious to report from the financial front… we go back to our sideline job: irritating our dear readers.

Slimy and Hideous: Yes, “Bad Guy” Theory is on the table. We were set to heave it over the side, like a fish too small to meet the legal limit. But after reading our reader mail… followed by a restless night of prayer, meditation, and hard drinking… we decided to look further. And from what we can see, it is slimy and hideous.

“Bad Guy” Theory (BGT) maintains that there are some people who are good, and others who are bad. The good ones think they can spot the bad ones, and that they have the right and duty to kill them, because, well, they’re up to no good. Many readers believe BGT is essentially right; they know damn well who the bad guys are, and think your editor is an SOB for suggesting otherwise.

Writes one, referring to Muslims, Iranians, or Palestinians (we’re not sure which): "If they could, they’d kill you, me, and our families."

We have some personal experience with Iranian people. We lived in Paris for many years and knew, casually, a family of Iranians. We had dinner with them once or twice, in their apartment in the 16th arrondissement. Never once did they go for our throats with a butcher knife. Nor was the wine poisoned. (The conversation was deathly, but not, as it turned out, fatal.)

Another reader thinks our suggestion – that even good people sometimes do bad things – was out of line: "You owe all of your subscribers an apology." This reader was particularly annoyed by our implication that dropping an atomic bomb on civilians was perhaps not such a good idea. (We’ll come back to that in a minute.)

God Will Sort Them Out: BGT is as ancient as the Old Testament. Each generation, each culture, and each tribe has had its bad guys. The neighboring village. The nation over the mountains. Spartans. Queers. Yids. Reds. Bourgeois reactionaries. Mensheviks. Kulaks. Intellectuals. Gypsies. Heretics. Papists. Prods. Huns. Gooks. Kafirs. Insurgent Filipino savages. Rebel slaves. And bog-trotting, mouth-breathing, knuckle-dragging Paddies.

They all deserved to die… and all got the death sentence. Not that they necessarily did anything wrong. But their thoughts… their beliefs… their intentions and motivations marked them as bad guys. But how could you know what was really in peoples’ hearts and minds? Use the rack and thumbscrews to find out! Or don’t worry about it. “Kill them all,” said the Count of Citeaux before the Massacre at Béziers in 1209. “God will sort them out.”

But wait… A lawyer put the question to Jesus: Does “Love Thy Neighbor” apply to bad guys? Jesus came back at him with the Parable of the Good Samaritan. A man lay on the ground, beaten and robbed. The good Jews passed him by, including a priest. But a Samaritan – a bad guy! – came to his aid. BGT didn’t work, He implied; you would be judged on what you did, not who you were. And it didn’t particularly matter what you had done in the past, either. What you did now and in the future were what counted. “Go forth and sin no more,” said He to the bad gal who was about to be stoned to death.

Common law, the idea that you should be judged impartially and according to common rules and “common sense,” also emerged from the swamp and blood of prehistoric life. It, too, turned away from BGT.

Million Sorry Souls: On August 8, 1945, Nagasaki, Japan was still intact. Its citizens were living on short rations. They were mostly old men, women, and children. The young men had already been drafted into the army. If we had been able to look into their hearts and minds, we probably would have found that they wished the entire American nation would drop dead. Admiral Nimitz ruled the sea. General LeMay was master of the air. And General MacArthur was already on Japanese soil at Okinawa. It was because of them, they reasoned, that the Japanese were dying of disease and hunger – short of food, fuel, clothing, and just about everything else.

It was onto these people that Harry Truman dropped the second atomic bomb. They were “bad guys,” said the U.S. press. They “supported the war,” said God-fearing Americans. Besides, it “saved our soldiers’ lives” said Truman.

Dwight Eisenhower, then supreme commander of the allied forces in Europe, disagreed. He recalled in a 1963 interview that: "It wasn’t necessary to hit them with that awful thing. I voiced to him my grave misgivings, first on the basis of my belief that Japan was already defeated and that dropping the bomb was completely unnecessary, and secondly because I thought that our country should avoid shocking world opinion by the use of a weapon whose employment was, I thought, no longer mandatory as a measure to save American lives."

William Leahy, the president’s chief of staff, wrote in his diary: "It is my opinion that the use of this barbarous weapon at Hiroshima and Nagasaki was of no material assistance in our war against Japan. The Japanese were already defeated and ready to surrender. My own feeling was that in being the first to use it, we had adopted ethical standard common to the barbarians of the Dark Ages. I was not taught to make war in that fashion, and wars cannot be won by destroying women and children."

Even the Uber Bomber himself, Major General Curtis LeMay, who had already scorched Tokyo with the most destructive bombing raid in history, was against it: "The war would have been over in two weeks without the Russians entering and without the atomic bomb. The atomic bomb had nothing to do with the end of the war at all."

So was Admiral Chester Nimitz, who had beaten the Japanese fleet and chased them back to the home islands: "The Japanese had, in fact, already sued for peace before the atomic age was announced to the world with the destruction of Hiroshima and before the Russian entry into the war. The atomic bomb played no decisive part, from a purely military standpoint, in the defeat of Japan."

And what about America’s top commander in the Pacific, General Douglas MacArthur? President Nixon recalled: "General Douglas MacArthur once spoke to me very eloquently about it, pacing the floor of his apartment in the Waldorf. He thought it a tragedy that the bomb was ever exploded. MacArthur believed that the same restrictions ought to apply to atomic weapons as to conventional weapons, that the military objective should always be limited damage to noncombatants. MacArthur, you see, was a soldier. He believed in using force only against military targets, and that is why the nuclear thing turned him off."

So what to make of it? Who were the bad guys? You decide. But keep in mind that for every person who thinks he can tell the good guys from the bad ones, there must be hundreds of broken bones… thousands of broken hearts… and a million sorry souls roasting in some ashpit in Hell… wishing they had never tried."
- https://www.theburningplatform.com/
Posted by CoyotePrime at 6:00 AM