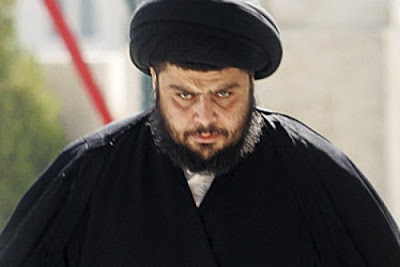 "We used to call him “Mookie.” God, we hated him. Back in 2006-07, while patrolling the streets of east Baghdad, Muqtada al-Sadr’s Mahdi Army militia was our sworn enemy.

These impoverished, slum-dwelling Shiite youths hit us with sniper fire and deadly improvised explosive devices day after day. They killed and maimed American troops daily, including my boys - Alex Fuller and Mike Balsley - who died Jan. 25, 2007. We’d patch up our wounded, call in a medevac helicopter, then roll back into those city streets the very next day. As we patrolled, Sadr’s ubiquitous face would taunt us, plastered as it was on billboards, posters and flags throughout the neighborhood.

Now, in a truth stranger than fiction, Sadr’s political party has won the recent Iraqi elections. The former warlord and killer of Americans may now play kingmaker in Iraq. Of course, mine is only one - highly biased - side of the story. From Sadr’s perspective, we were occupiers, a foreign military force with no legitimacy in his country. Perhaps he had a point. Still, Sadr’s victory demonstrates just how far off the rails America’s project in Iraq has gone, and it epitomizes the unintended consequences of offensive war and regime change.

When the United States uses its impressive military machine to topple a tyrant - in this case, Saddam Hussein - it’s impossible to predict the course of the chaos that follows. Fracture a society, it seems, and the most nefarious (and well-armed) actors often rise to the top: militiamen, criminal elements, Islamists and sociopaths of various stripes. Sadr is just one example.

Still, Washington never seems to learn. Since October 2001, our military has been ordered to topple at least three sovereign governments - those of Afghanistan, Iraq and Libya - and is theoretically seeking to overthrow another regime in Syria. Republican and Democratic presidents alike have ordered these ill-advised operations, demonstrating the striking bipartisanship of American militarism.

Let us, then, take a tour of the tragic outcomes unfolding today in each of these victims of U.S.-imposed regime change.

Afghanistan was the “good war,” according to former President Barack Obama - the one we had to fight. After all, Osama bin Laden and al-Qaida central were there. So, less than a month after the 9/11 attacks, American bombs and paratroopers started falling on the Taliban regime throughout Afghanistan. It was all over pretty quick. The Taliban surrendered or fled, bin Laden escaped to Pakistan, and that was that. Only the U.S. military never left. What began as a kill-or-capture mission quickly morphed into a lengthy military occupation and an ill-fated attempt to remake Afghan society in America’s own image.

How’s that turned out? Well, the Taliban and anti-American insurgency never really ended. In fact, it’s worse than ever. Washington backed a highly corrupt, venal, Afghan government that lacked legitimacy and was chock full of former warlords. Peace is no closer today than it was in 2001.

Here matters stand in 2018, 17 years into America’s longest war. Consider the biggest story that no one is talking about in today’s Trump-obsessed mainstream media: the recently released report by the Special Inspector General for Afghan Reconstruction. According to this official watchdog agency:

•Afghan troop numbers are decreasing while casualties are increasing.
•More Afghan districts are contested by the Taliban than at any time in recent memory.
•Civilian casualties are increasing.
•Afghanistan’s Taliban-funding opium crop just reached record levels.
•Worst of all, Afghanistan’s gross domestic product is so reliant on foreign aid that it cannot sustain itself independently.

In Afghanistan, the United States turns out to have brought only chaos; to have worsened an already awful social situation. Rather than lessening extremism, U.S. occupation has only emboldened the Taliban and led to the creation of a local Islamic State franchise in Afghanistan’s mountainous east.

Iraq was a war of choice. Based on flawed - if not deceptive - intelligence, the invasion succeeded in toppling Saddam but ushered in looting, criminality, insurgency and a brutal civil war that has never really ended. By backing the once-oppressed Shiites, the U.S. empowered a chauvinist tyranny of the majority and alienated the country’s Kurdish and Sunni minorities. By 2004, both Sunni and Shiite insurgents (including Sadr’s gang) were attacking U.S. troops and murdering civilians in the streets.

Matters temporarily improved in 2009-12, when Washington made a desperate play - paying off former insurgents to turn on the most radical Islamists in their midst. Unfortunately, this was but a Band-Aid on a gaping wound, one that couldn’t staunch the chaos over the long term. When conventional U.S. forces left Iraq in December 2011, they left behind a Shiite autocrat who massacred protesters and oppressed minorities. The civil war again ran hot, Islamic State arose and captured one-third of the country, and the northern Kurds essentially declared de-facto independence. Iraq was fractured, divided and blood-soaked - again.

So it was that U.S. soldiers again re-entered the country. They are still there; fighting and sometimes dying on behalf of a government in Baghdad that will soon be led by one its sworn enemies - Muqtada al-Sadr.

In Libya, “no-drama” Obama assured us, the U.S. could “lead from behind” and let the mostly European international community do much of the heavy lifting in the takedown of yet another dictator, Moammar Gadhafi. It didn’t turn out that way. U.S. airstrikes devastated the regime’s military and an assortment of tribal militias overturned the Libyan government. Gadhafi? Well, he never saw the inside of an international tribunal; instead he was captured and lynched, beaten, sodomized with a bayonet and shot to death. Secretary of State Hillary Clinton glowed in the aftermath of his murder, boasting that “we came, we saw, he died.”

Unfortunately, and ever so predictably, Libya never became the liberal, democratic paradise the Obama administration dreamed of. Instead, seven years of factional warfare have followed. Libya is now fractured, divided between the forces of an autocratic general in the east, a tumultuous “official” government in the west, and sprinkled with fiefdoms of numerous Islamist factions, including a new franchise of Islamic State. Unlike George W. Bush, Obama at least seemed to realize his mistake and the mission’s failure, calling the operation a “sh*t show” and the “worst mistake” of his presidency. Libya remains a sh*t show.

So that’s the tortured record of American regime toppling and regime “building” in the post-9/11 era. Three unabashed failures; the cost: nearly 7,000 American troops killed, hundreds of thousands of civilians dead, millions of refugees, and trillions of dollar spent. The United States, and the world, is no safer now than it was in 2001. Given the counterproductive and horrific results of the “war on terror,” Washington would have been better served had it dug a massive hole in the Mojave Desert, bulldozed in those trillions of dollars and buried them. 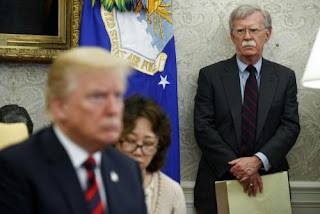 Nonetheless, here we stand, with war hawks atop the Trump administration - led by national security adviser John Bolton and Secretary of State Mike Pompeo - who have repeatedly called for regime change in Iran and North Korea. It’s frightening.

Here’s a thought: When the war drums start beating again - and they will - let us remember the tragic record of the last three failed regime changes perpetrated by Washington and think long and hard before sleepwalking into the next catastrophe.

But don’t hold your breath."
-https://www.zerohedge.com/
Posted by CoyotePrime at 11:30 AM