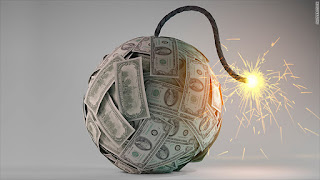 
“I can calculate the movement of the stars, but not the madness of men.”
– Sir Isaac Newton, after losing a fortune in the South Sea bubble.

“We've touched previously upon the “white elephant” in the room: that the biggest, most important bubble investors should worry about is in bonds, NOT stocks. Consider the following… The financial system is based on debt. US Treasuries, the benchmark for an allegedly “risk free” rate of return, is the asset against which all other assets are priced based on their relative riskiness. This “risk free” rate has been falling steadily for over 25 years.

The Wall Street Journal estimates that a third of traders have never witnessed a rate hike. However, the real problem is far greater than this. Bonds have been in a bull market for over 30 years. Forget rate hikes… an entire generation of investors and money managers (anyone under the age of 55) has been investing in an era in which risk has generally gotten cheaper and cheaper. This, in turn, has driven the rise in leverage in the financial system. As the risk-free rate fell, so did all other rates of return. Thus investors turned to leverage or using borrowed money to try to gain greater rates of return on their capital. The ultimate example of this is the derivatives market, which is now over $700 trillion in size. (Some estimates place the derivatives as high as $1.5 - 2.2 quadrillion...-CP) This entire mess is backstopped by about $100 trillion (at most) in bonds posted as collateral.

This formula of ever increasing leverage works relatively well when the underlying asset backstopping a trade is rising in value (think of the housing bubble, which worked fine as long as housing prices rose). However, if the asset ever loses value, you very quickly run into trouble because you need to post more as collateral to backstop your trade. If you can’t do this easily, the margin calls start coming and you can find yourself having to unwind a massive position in a hurry. This is how crashes occur. This is what caused 2008. And it’s what will cause the next crisis as well.

Despite all of the rhetoric, the world has not deleveraged in any meaningful way. The only industrialized country to deleverage since 2008 is Germany. 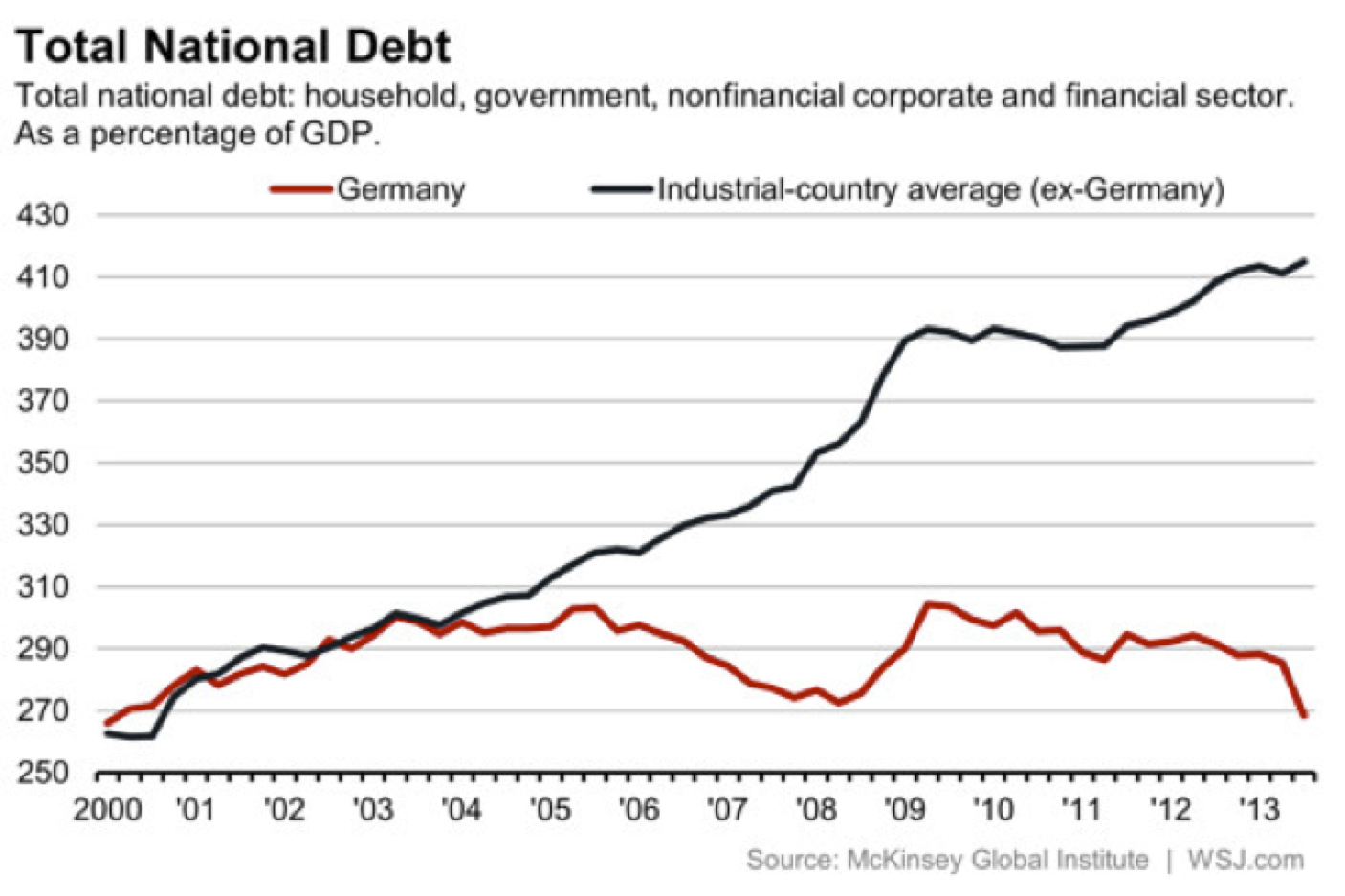 This is not unique to sovereign nations either. As McKinsey recently noted, there has been no meaningful deleveraging in any sector of the global economy (the best we’ve got is households and financial firms which have basically flat-lined since 2008). 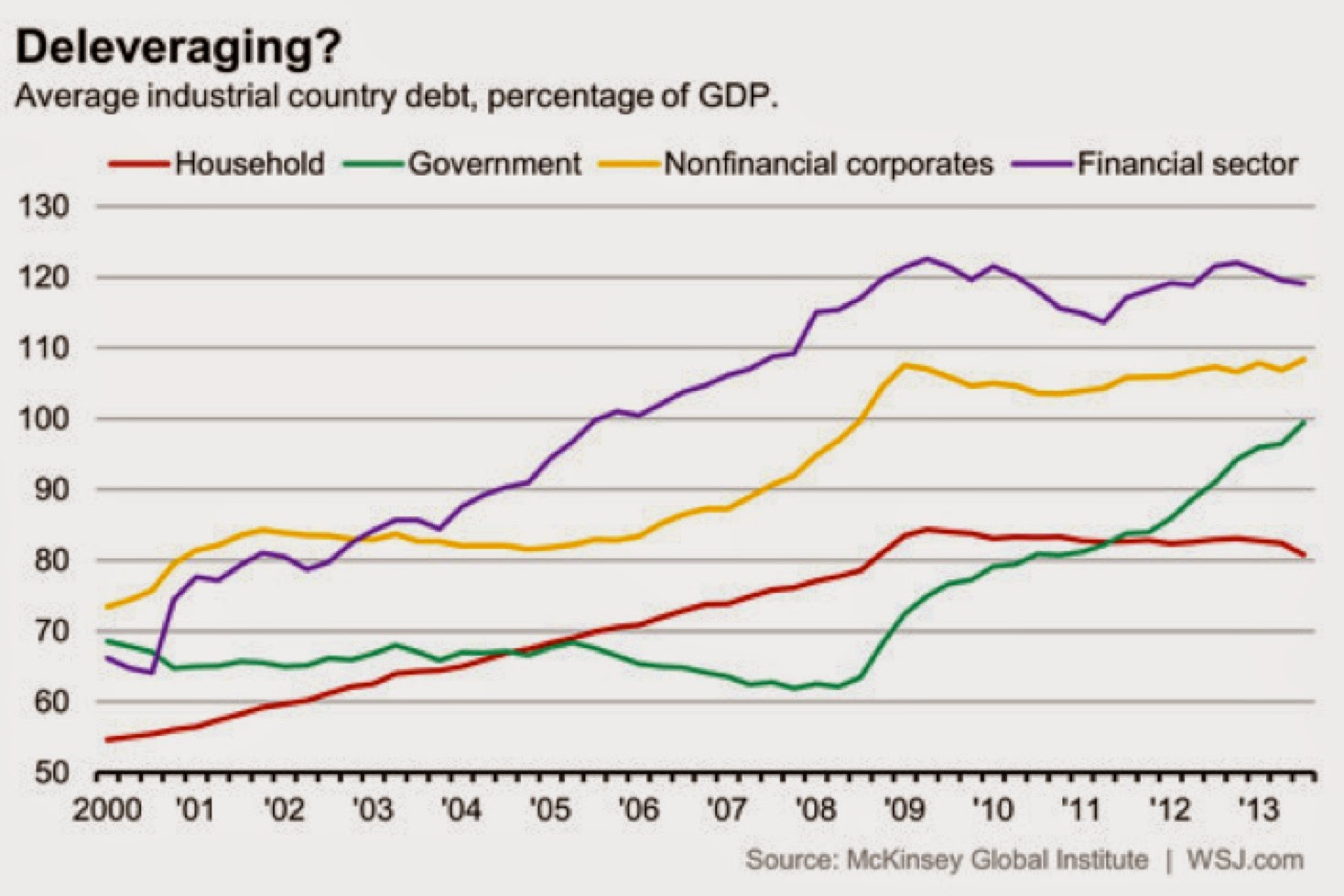 In the simplest of terms, the 2008 collapse occurred because of too much leverage fueled by cheap debt. This worked fine until the assets backstopping the leveraged trades fell in value, which brought about margin calls and a selling panic. The big problem however is that NO ONE got the message that leverage was a problem. Instead, everyone has become even MORE leveraged than they were in 2008. And they did this against an ever-smaller pool of quality assets (the Fed and other Central Banks’ QE programs have actually removed high grade collateral from the financial markets).

Thus, we now have a financial system that is even more leveraged than in 2007… backstopped by even less high quality collateral. And this time around, most industrialized sovereign nations themselves are bankrupt, meaning that when the bond bubble pops, the selling panic and liquidations will be even more extreme. The next round of the crisis is coming, and it’s going to make 2008 look like a picnic.”
- http://www.zerohedge.com/
◆
Related:
“It’s The Derivatives, Stupid!”
- http://www.webofdebt.com/articles/its_the_derivatives.php

"Nikolai Kondratiev's "Long Wave": The Mirror of the Global Economic Crisis"
- http://coyoteprime-runningcauseicantfly.blogspot.com/
◆
Updates 5/29/18:
•"The European Union’s Days Are Numbered, Chaos Erupts in Italy"
•"Which Banks Are Most Exposed To Italy's Sovereign Debt?
(Other Than The Horribly-Exposed Italian Banks)"
•“European Implosion Sends Panic Through Global Markets As
George Soros Warns ‘We May Be Heading For Another Major Financial Crisis’“