“Wish Fulfillment? No. But Dreams Do Have Meaning” 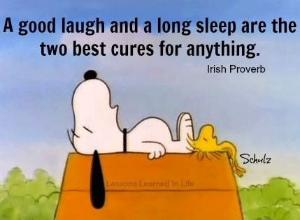 “Wish Fulfillment? No. But Dreams Do Have Meaning”
By Tiffany Sharples

"Dreams may not be the secret window into the frustrated desires of the unconscious that Sigmund Freud first posited in 1899, but growing evidence suggests that dreams - and, more so, sleep - are powerfully connected to the processing of human emotion.

According to new research presented on 2015 at the annual meeting of the Associated Professional Sleep Societies in Seattle, adequate sleep may underpin our ability to understand complex emotions properly in waking life. "Sleep essentially is resetting the magnetic north of your emotional compass," says Matthew Walker, director of the Sleep and Neuroimaging Lab at the University of California, Berkeley.

A study by Walker and his colleagues examined how rest - specifically, rapid eye movement, or REM, sleep - influences our ability to read emotions in other people's faces. In the small analysis of 36 adults, volunteers were asked to interpret the facial expressions of people in photographs, either following a 60- or 90-minute nap during the day or with no nap. Participants who had reached REM sleep (when dreaming most frequently occurs) during their nap were better able to identify expressions of positive emotions such as happiness in other people, compared with participants who did not achieve REM sleep or did not nap at all. Those volunteers were more sensitive to negative expressions, including anger and fear.

Past research by Walker and colleagues at Harvard Medical School, which was published in the journal Current Biology, found that in people who were sleep deprived, activity in the prefrontal lobe - a region of the brain involved in controlling emotion - was significantly diminished. He suggests that a similar response may be occurring in the nap-deprived volunteers, albeit to a lesser extent, and that it may have its roots in evolution. "If you're walking through the jungle and you're tired, it might benefit you more to be hypersensitive to negative things," he says. The idea is that with little mental energy to spare, you're emotionally more attuned to things that are likely to be the most threatening in the immediate moment. Inversely, when you're well rested, you may be more sensitive to positive emotions, which could benefit long-term survival, he suggests: "If it's getting food, if it's getting some kind of reward, finding a wife, those things are pretty good to pick up on."

Our daily existence is largely influenced by our ability "to understand our societal interactions, to understand someone else's emotional state of mind, to understand the expression on their face," says Ninad Gujar, a senior research scientist at Walker's lab, and lead author of the study, which was recently submitted for publication. "These are the most fundamental processes guiding our personal and professional lives."

REM sleep appears not only to improve our ability to identify positive emotions in others, but it may also round out the sharp angles of our own emotional experiences. Walker suggests that one function of REM sleep - dreaming, in particular - is to allow the brain to sift through that day's events, process any negative emotion attached to them, then strip it away from the memories. He likens the process to applying a "nocturnal soothing balm." REM sleep, he says, "tries to ameliorate the sharp emotional chips and dents that life gives you along the way. It's not that you've forgotten. You haven't," he says. "It's a memory of an emotional episode, but it's no longer emotional itself."

That palliative safety-valve quality of sleep may be hampered when we fail to reach REM sleep or when REM sleep is disrupted, Walker says. "If you don't let go of the emotion, what results is a constant state of anxiety," he says. The theory is consistent with new research conducted by Rebecca Bernert, a doctoral candidate in clinical psychology at Florida State University who specializes in the relationship between sleep and suicidal thoughts and behaviors, and who also presented her work at the sleep conference this week.

In her study of 82 men and women between the ages of 18 and 66, who were admitted into a mental health hospital for an emergency psychiatric evaluation, Bernert discovered that the presence of severe and frequent nightmares or insomnia was a strong predictor of suicidal thoughts and behaviors. More than half of the study participants had attempted suicide at least once in the past, and the 17% of the study group who had made an attempt within the previous month had dramatically higher scores in nightmare frequency and intensity than the rest. Bernert found that the relationship between nightmares or insomnia and suicide persisted, even when researchers controlled for other factors like depression.

Past studies have also established a link between chronic sleep disruption and suicide. Sleep complaints, which include nightmares, insomnia and other sleep disturbances, are listed in the current Substance Abuse and Mental Health Services Administration's inventory of suicide prevention warning signs. Yet, what distinguishes Bernert's research is that when nightmares and insomnia were evaluated separately, nightmares were still independently predictive of suicidal behavior. "It may be that nightmares present a unique risk for suicidal symptoms, which may have to do with the way we process emotion within dreams," Bernert says.

If that's the case, it may help explain the recurring nightmares that characterize psychiatric conditions such as post-traumatic stress disorder (PTSD), Walker says. "The brain has not stripped away the emotional rind from that experience memory," he says, so "the next night the brain offers this up, and it fails again, and it starts to sound like a broken record...What you hear [PTSD] patients describing is, 'I can't get over the event.'"

At the biological level, Walker explains, the "emotional rind" translates to sympathetic nervous system activity during sleep - faster heart rate and the release of stress chemicals. Understanding why nightmares recur and how REM sleep facilitates emotional processing, or hinders it when nightmares take place and perpetuate the physical stress symptoms, may eventually provide clues for effective treatments of painful mental disorders. Perhaps, even, by simply addressing sleeping habits, doctors could potentially interrupt the emotional cycle that can lead to suicide. "There is an opportunity for prevention," Bernert says.

The new findings highlight what researchers are increasingly recognizing as a two-way relationship between psychiatric disorders and disrupted sleep. "Modern medicine and psychiatry have consistently thought that psychological disorders seem to have co-occuring sleep problems, and that it's the disorder perpetuating the sleep problems," says Walker. "Is it possible that, in fact, it's the sleep disruption contributing to the psychiatric disorder?"
- http://www.time.com/
Posted by CoyotePrime at 2:25 PM