"A Message From The Ministry Of Homeland Security, And H.L. Mencken" 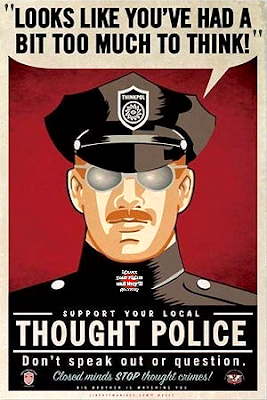 "Liberty and democracy are eternal enemies, and every one knows it who has ever given any sober reflection to the matter. A democratic state may profess to venerate the name, and even pass laws making it officially sacred, but it simply cannot tolerate the thing. In order to keep any coherence in the governmental process, to prevent the wildest anarchy in thought and act, the government must put limits upon the free play of opinion. In part, it can reach that end by mere propaganda, by the bald force of its authority - that is, by making certain doctrines officially infamous. But in part it must resort to force, i.e., to law. One of the main purposes of laws in a democratic society is to put burdens upon intelligence and reduce it to impotence. Ostensibly, their aim is to penalize anti-social acts; actually their aim is to penalize heretical opinions.

At least ninety-five Americans out of every 100 believe that this process is honest and even laudable; it is practically impossible to convince them that there is anything evil in it. In other words, they cannot grasp the concept of liberty. Always they condition it with the doctrine that the state, i.e., the majority, has a sort of right of eminent domain in acts, and even in ideas - that it is perfectly free, whenever it is so disposed, to forbid a man to say what he honestly believes. Whenever his notions show signs of becoming "dangerous," ie, of being heard and attended to, it exercises that prerogative. And the overwhelming majority of citizens believe in supporting it in the outrage. Including especially the Liberals, who pretend - and often quite honestly believe - that they are hot for liberty. They never really are. Deep down in their hearts they know, as good democrats, that liberty would be fatal to democracy - that a government based upon shifting and irrational opinion must keep it within bounds or run a constant risk of disaster. They themselves, as a practical matter, advocate only certain narrow kinds of liberty - liberty, that is, for the persons they happen to favor. The rights of other persons do not seem to interest them. If a law were passed tomorrow taking away the property of a large group of presumably well-to-do persons - say, bondholders of the railroads - without compensation and without even colorable reason, they would not oppose it; they would be in favor of it. The liberty to have and hold property is not one they recognize. They believe only in the liberty to envy, hate and loot the man who has it."
- H.L. Mencken,
"Liberty and Democracy" in the Baltimore Evening Sun (13 April 1925)

If Mencken were alive today...
Posted by CoyotePrime at 9:17 PM