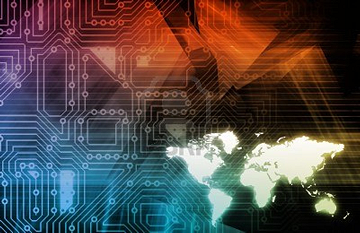 “The Incredible Potential of Unexpectedness”
by Chet Raymo
“The Jesuit scientist/mystic Teilhard de Chardin imagined what he called a "noosphere" (from the Greek word for "mind") as the next stage of terrestrial evolution- an envelope of pure human thought embracing the planet. This would be the inevitable result of human progress on a spherical Earth of finite surface area. We rub up against each other. We are stimulated by proximity. Railroads and airplanes extend the range of our interaction. Better still (he wrote), "thanks to the prodigious biological event represented by the discovery of electromagnetic waves, each individual finds himself henceforth (actively and passively) simultaneously present, over land and sea, in every corner of the earth."

In “The Phenomenon of Man”, posthumously published in 1955, he wrote: "No one would dare to picture to himself what the noosphere will be like in its final guise, no one, that is, who has glimpsed however faintly the incredible potential of unexpectedness accumulated in the spirit of the earth."

I was thinking of Teilhard and his noosphere today as I watched my spouse curled up in her chair with her iPad, here in Ireland, reading the newspapers in New England and the Bahamas. No wires. No railroads or airplanes or Atlantic cables. Just sitting there in a sea of radiation, a universal envelope of shimmering electromagnetic fields instantaneously weaving her into an invisible envelope of information that encloses the material planet and leaks into space, an expanding bubble of pure thought racing outward into the cosmos at the speed of light.”
- http://blog.sciencemusings.com/
Posted by CoyotePrime at 8:08 PM