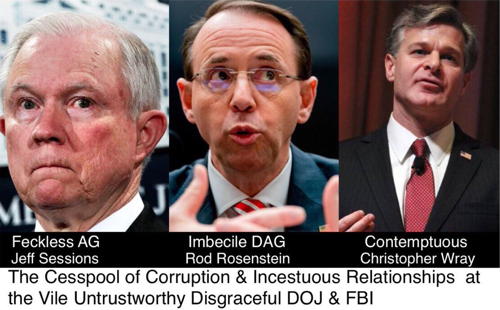 "The fabulous Coen Brothers of Hollywood couldn’t come up with a wackier Deep State than the one depicted on Cable News this week. Thursday’s House Judiciary Committee hearing had Congressman Jim Jordan (R- Ohio) in the role of “The Dude” from The Big Lebowski doing battle with Deputy Attorney General Rod Rosenstein as “Osborne Cox” in “Burn After Reading.” Rosenstein was sure burning, or at least smoldering in his seat, as Jordan badgered him about threatening House staffers by subpoenaing their emails and phone calls!

Had Mr. Jordan been a little more nimble of mind in his Dude role, had he not, say, downed that Red Bull and Ayahuasca “pick-me-up” before the committee session, he might have come back smartly at Mr. Rosenstein with a simple, “…yes, but you can subpoena the records of phone calls, can’t you?” Schwing. Only the poor clod muffed it, and Rosenstein’s praetorian guard of attorneys in the seats behind him joined in the mirthful smirkery, grand fellows of the Deep State are we, we eat Buckeyes for breakfast!

Now, Mr. Trey Gowdy (R – SC) is a different breed of porpoise among congressmen, kind of legal man-eating orca. In look and demeanor, he comes off as a cross between Atticus Finch and the young feller who played the banjo so well in the opening scenes of Deliverance. Mr. Rosenstein didn’t dare lay any mirthful smirky trips on Mr. Gowdy, who radiated the consolidated wrath of the legislative branch at this flock of executive branch popinjays. Mr. Gowdy, who is declining to run for his seat this year, may be bound for bigger things. Some say he may be the next Attorney General.

In case you’ve forgotten, Rod Rosenstein is not the Attorney General, he’s the Deputy AG. His boss is Mr. Jeff Sessions, an elusive figure for months now in the malarial DC backwaters, like that Louisiana Swamp Thang that turns up in the fake Bigfoot documentaries, looming hairily through the night-vision optics in a cypress slough. Maybe three or four people have laid eyes on him since sometime back in April. Better check his office, make sure he isn’t hunched over face-down in a take-out order of tonkatsu ramen.

It’s rumored that our president, the Golden Golem of Greatness, can, shall we say, put the Department of Justice and its subsidiary, the FBI, out of their current misery by finally firing a few of these conniving top dawgs. Order Rosenstein to release un-redacted files he’s been sitting on for a year, and fire his ass for cause when he refuses. In the case of Mr. Sessions, for Godsake, call the undertaker.

The figures most hidden these days go by the names Barack Obama, Hillery Clinton, Bill Clinton, John Brennan, James Clapper, James Comey, Loretta Lynch, Huma Abedin, and Debbie Wasserman-Schultz. If or when the dark, tangled, matrix of “matters” at the FBI ever manage to get unraveled, these characters will come tumbling out with the yarn, dropping into the harsh daylight like little squirming larva of Tineola bisselliella, the common wool moth.

Personally, I can’t imagine that the mighty mischief at DOJ and the FBI the past two years was not initially approved before 1/20/17 in some fashion by Mr. Obama and with his explicit knowledge. There’s little doubt that the “Steele Dossier” was the “insurance policy” that FBI Counter-espionage Chief Peter Strzok and FBI attorney Lisa Page referred to in their famous text exchange about how to deal with the “terrifying” specter of a possible President Trump. Debbie Wasserman-Schultz needs to explain under oath how her humble IT employee, a Pakistani national, become a real estate millionaire in the DC burbs while servicing, shall we say, her laptop. Hillary, of course, is like some mythical Cave of Seven Winds - a boundless dark realm of winged beasts and crawling things. Loretta Lynch still has some public ‘splainin’ to do about meeting certain folks on tarmacs. The grand juries are begging to be convened.”
- http://kunstler.com/
Posted by CoyotePrime at 6:52 AM