"How the Government Became a Deep State Puppet" 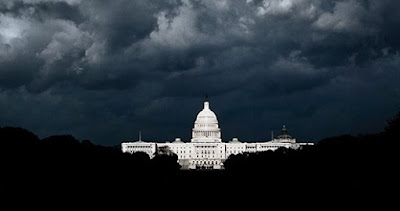 "How the Government Became a Deep State Puppet"
By Bill Bonner

"When you’ve got a chainsaw, you cut down a tree. And when you’ve got control of monetary and fiscal policy…you go to work on an economy. In both cases, you leave them in pieces.

Knuckleheaded experiment: The difference between the next crash and the last two is that this time, the feds have less room to maneuvre. At the end of an expansion cycle, like the one America has had for almost ten years, the federal government should be running a surplus. That’s the whole idea of countercyclical fiscal policy. When the economy is hot, you’re supposed to be cool, with budget surpluses. When the economy cools off, you then heat it up with more spending.

But currently, the US government is conducting a pro-cyclical fiscal experiment. It’s late in the expansion cycle, but it’s already borrowing heavily, with annual deficits already programmed to reach $2 trillion by 2028. And that’s without a crash or a recession. Good luck with that.

Meanwhile, over at the Fed, another knuckleheaded experiment is going on. It has left real rates (adjusted for inflation) below zero for nearly a decade, even though a recovery, such as it was, began in 2009. This, too, is unprecedented…and almost surely disastrous. That, of course, is what we’re waiting to find out.

But what we’ve been looking at lately is how the dots connect, in a straight line - from Bad Guy Theory…to the Deep State…to the Empire…thence to bankruptcy, chaos, and catastrophe.

Deep State puppets: As we pointed out on Tuesday, an empire is not just a bigger government. It is a different animal, as different from a small, local democracy as a pussy cat from a sabre-toothed tiger. In a small government, citizens can run the show. They know what is going on and have a say in what happens next.

In a global Deep State Empire, on the other hand, citizens play largely symbolic roles. They vote, but their votes don’t really matter. They voice their opinions, but no one really cares what they think. They have their representatives in Washington, but these officials, too, are largely ornamental. They talk, but they don’t say anything. They vote on laws, but only after they’re told which laws to pass. They debate…but are careful not to discuss any of the things that really matter.

The US now runs a worldwide empire - at huge expense. One of the hidden costs: the federal government itself. It is supposed to be a government of, by, and for the people. But for all the many reasons we’ve described in these pages, an empire doesn’t work that way. It is by, for, and of the insiders who control it. This is a big change; you’d think the people’s representatives might want to discuss it.

Congress and the federal government have practically become puppets of the Deep State…but who’s going to say so? The real power now is in the hands of the elite…people who ‘work the system’ for their own benefit. This is The Swamp that Donald Trump campaigned against. The inside deals…the bribes…the sweet sinecures…and the greasy campaign contributions.

Elite: Of course, there is no country without an elite. In every one of them, from the Roman Empire…to the Soviet Union…to the court of King Louis XVI, the elite call the shots, more or less. And there is no reason why their decisions should be worse than those of the great mob of citizens.

In fact, they are often better. An honest elite is supposed to use its superior judgement, its better education…and its intelligence and expertise…to help the masses make better decisions. With calm words and reason, the wisest citizens, for example, are supposed to head off lynch mobs and popular delusions. They’re expected to make sure the sewage treatment plant doesn’t drain directly into the town water supply…and keep the traffic lights coordinated.

The elite invent things…they are artists, poets, and entertainers…They launch new businesses, write books, and win Nobel Prizes. They are the vanguard of civilization…exploring, guiding, and experimenting…setting fashions and standards…building schools and insane asylums…and dragging the bulk of mankind forward.

But as the scale of a society grows, the elite get farther and farther ahead. Their interests and those of the rest of the people diverge. They live in different zip codes - on the two coasts, for example, not in the Heartland. They work in finance, communications, technology, and government…not in Main Street industries such as manufacturing, farming, and retailing. They get richer…while 90% of the population loses ground financially.

Then…the powerful federal falcon no longer pays any attention to the voting falconer. And why should it? The masses have no idea what is going on…how the game is played…or how they are being ripped off. As the scale increases, gradually and then suddenly, a big gap opens between the ‘leaders’ and the ‘people’…between public policy and private consequences…and between real news and ‘fake news’.

The elite insiders - in business, government, academia, religion, and media…left and right…whether it is the centralised government of Louis XVI or the post-World War I USA…Republican or Democrat - become parasites. In her confirmation hearing, CIA Director Gina Haspel used a well-worn phrase, promising to ‘speak truth to power.’ Thinking people - if any were in the room - must have fallen off their chairs guffawing. Whatever Ms. Haspel or the other toadies, sharpies, and jackasses in the Deep State will say…it won’t be ‘truth to power’. They are power. And they will say whatever BS suits the occasion.

Stay tuned for more on how the Deep State Empire really works…and why it damns America to Hell."
- https://www.marketsandmoney.com.au/
Posted by CoyotePrime at 1:19 AM