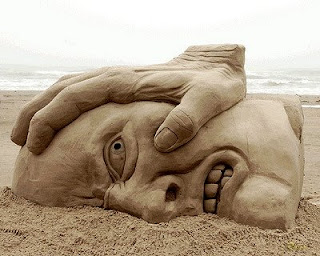 "New research on mice shows the brain processes aggressive behavior as it does other rewards. Mice sought violence, in fact, picking fights for no apparent reason other than the rewarding feeling. The mouse brain is thought to be analogous to the human brain in this study, which could shed light on our fascination with brutal sports as well as our own penchant for the classic bar brawl. In fact, the researcher say, humans seem to crave violence just like they do sex, food or drugs.
Scientists have known that mice and other animals are drawn to fights. Until now, they didn't know how the brain was involved. The study, detailed in the journal Psychopharmacology, reveals the same clusters of brain cells involved in other rewards are also behind the craving for violence. "Aggression occurs among virtually all vertebrates and is necessary to get and keep important resources such as mates, territory and food," said study team member Craig Kennedy, professor of special education and pediatrics at Vanderbilt University in Tennessee. "We have found that the reward pathway in the brain becomes engaged in response to an aggressive event and that dopamine is involved."
For the experiments, the researchers placed a pair of mice, one male and one female, in a cage. Then, the female was removed and a so-called male intruder mouse entered the cage. That triggered aggressive behavior in the resident male. The tell-tale signs of aggression included tail rattle, an aggressive sideways stance, boxing and biting. After the initial scuffle ended, the resident male mouse was trained to nose-poke a target to get the intruder to return. Results showed the home mouse consistently poked the target and fought with the introduced mouse, indicating, the researchers say, that the aggressive encounter was seen as a reward. "We learned from these experiments that an individual will intentionally seek out an aggressive encounter solely because they experience a rewarding sensation from it," Kennedy said.
To figure out whether the brain's reward pathway was involved, the scientists treated the home mice with a drug to block dopamine in certain parts of the brain known to be involved in rewards like food and drugs. The treated mice were less likely to instigate the intruder's entry. “This shows for the first time that aggression, on its own, is motivating, and that the well-known positive reinforcer dopamine plays a critical role," Kennedy said. Kennedy explained that the experiments have implications for humans. The reward pathway in the brains of humans and mice are very similar, he said. "Aggression is highly conserved in vertebrates in general and particularly in mammals," Kennedy told LiveScience. "Almost all mammals are aggressive in some way or another." He added, "It serves a really useful evolutionary role probably, which is you defend territory; you defend your mate; if you're a female, you defend your offspring." Even though it served a purpose for other animals, in modern human societies, Kennedy said, a propensity toward aggression is not beneficial and can be a problem."
- http://www.livescience.com/
Posted by CoyotePrime at 8:56 PM

Email ThisBlogThis!Share to TwitterShare to FacebookShare to Pinterest
Labels: LiveScience