“This Day In History: Battle of Little Bighorn,1876” 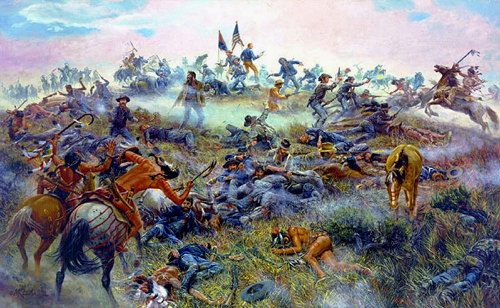 Above, the mythical, heroic fable...
“This Day In History: Battle of Little Bighorn,1876”
by History.com

Crazy Horse and Sitting Bull, leaders of the Sioux tribe on the Great Plains, strongly resisted the mid-19th-century efforts of the U.S. government to confine their people to reservations. In 1875, after gold was discovered in South Dakota’s Black Hills, the U.S. Army ignored previous treaty agreements and invaded the region. This betrayal led many Sioux and Cheyenne tribesmen to leave their reservations and join Sitting Bull and Crazy Horse in Montana. By the late spring of 1876, more than 10,000 Native Americans had gathered in a camp along the Little Bighorn River–which they called the Greasy Grass–in defiance of a U.S. War Department order to return to their reservations or risk being attacked.

In mid-June, three columns of U.S. soldiers lined up against the camp and prepared to march. A force of 1,200 Native Americans turned back the first column on June 17. Five days later, General Alfred Terry ordered Custer’s 7th Cavalry to scout ahead for enemy troops. On the morning of June 25, Custer drew near the camp and decided to press on ahead rather than wait for reinforcements.

At mid-day, Custer’s 600 men entered the Little Bighorn Valley. Among the Native Americans, word quickly spread of the impending attack. The older Sitting Bull rallied the warriors and saw to the safety of the women and children, while Crazy Horse set off with a large force to meet the attackers head on. Despite Custer’s desperate attempts to regroup his men, they were quickly overwhelmed. Custer and some 200 men in his battalion were attacked by as many as 3,000 Native Americans; within an hour, Custer and every last one of his soldier were dead.

The Battle of Little Bighorn–also called Custer’s Last Stand–marked the most decisive Native American victory and the worst U.S. Army defeat in the long Plains Indian War. The gruesome fate of Custer and his men outraged many white Americans and confirmed their image of the Indians as wild and bloodthirsty. Meanwhile, the U.S. government increased its efforts to subdue the tribes. Within five years, almost all of the Sioux and Cheyenne would be confined to reservations.”
- https://www.history.com/this-day-in-history
- https://www.theburningplatform.com/
○
An alternative point of view... 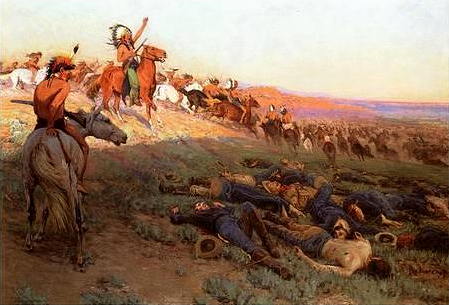 "June 25 is a special holiday to most of the tribes of the Great Sioux Nation. It is the anniversary of the day that Lt. Colonel George A. Custer took himself and his troops into the valley of death. To ask a Lakota, Cheyenne or Arapaho, the three tribes that fought side-by-side at the Battle of the Greasy Grass or Little Bighorn, why they celebrate June 25, is like asking an American military veteran why he celebrates Memorial Day or Veteran's Day.

Custer arrived in the Northern Plains in 1873, and in 1874 he led an expedition of 1,200 soldiers and miners into the Sacred Black Hills (He' Sapa) of the Sioux Nation. Six years earlier the government of the United States and the leaders of all of the tribes of the Great Sioux Nation, with the exception of the band led by Crazy Horse, signed the Fort Laramie Treaty of 1868 that guaranteed them the possession and security of the Black Hills, and millions of acres of adjoining lands. When Custer's team discovered gold and violated the Treaty of 1868 with the ink barely dry on it, the Treaty was tossed into the trash can of history. General George Crook, another general appropriately named, was supposed to use his army to keep the miners out of the Black Hills, but still smarting from his thumping by Crazy Horse and his warriors at Rosebud Creek, a defeat that is seldom covered in American history books, he never put his heart into defending the Black Hills from the gold-hungry miners. In fact, Crook was leading a cavalry unit to assist Custer in the event he ran into any large war parties when he ran into Crazy Horse and was forced to withdraw. Some historians say that if he had not been defeated at Rosebud Creek, he would have been in a position to support Custer at the Little Bighorn.

Crow scouts guiding Custer toward the Little Bighorn were apprehensive. They knew there was a large encampment ahead, and they feared for their lives as well as that of Lt. Colonel Custer and his troops. Many history books and movies would have you believe that Custer and his men were surrounded by thousands of Indian warriors, made it to a high ridge, and made a gallant "Last Stand." The truth is that Custer made a cavalry charge into the huge camp and the Sioux, Cheyenne and Arapaho warriors had to defend themselves against this unprovoked attack. They easily overpowered Custer and his Seventh Cavalry and took the lives of more than 200 soldiers, including that of Custer, before the day was over.

Anheuser-Busch Brewing Company mass-distributed a poster of Custer standing with his troops, pistols blazing, with hundreds of "blood thirsty" Indians converging on him. His defeat and death were probably a lot more ignoble than that. Movies like "They Died with their Boots On" became very popular in the 1940s, and George Armstrong Custer, a man who was totally undeserving of such acclaim, became a hero in the eyes of most Americans. A community situated in the heart of the Sacred Black Hills of the Sioux Nation is named Custer. Many Lakota find this the equivalent of naming a town in Israel after Hitler. Most Americans will never understand the fear and hatred that many Lakota had for Custer. By his actions he caused the deaths of many innocent Indian men, women and children, and his actions on the Washita made him an enemy of the Cheyenne and Arapaho people for life.

George Armstrong Custer lived by the sword and perished by the sword and became a national hero because of American ignorance, and because of the shameless promoting of his career by his wife, Elizabeth Bacon Custer. She wrote accounts that praised him as a military genius, a patron of arts, and a refined and cultivated man. And so the descendants of the Lakota, Cheyenne and Arapaho warriors, who handed a humiliating defeat to the United States Army in 1876, will celebrate June 25 as a great victory that they still speak of with pride."

Tim Giago is the editor and publisher of the weekly Native Sun News.
He can be reached at: editor@nsweekly.com
- http://www.huffingtonpost.com/

For a complete archaeological and pictorial analysis of the battle, please see:
- http://www.friendslittlebighorn.com/The-battle.htm
Posted by CoyotePrime at 7:07 AM