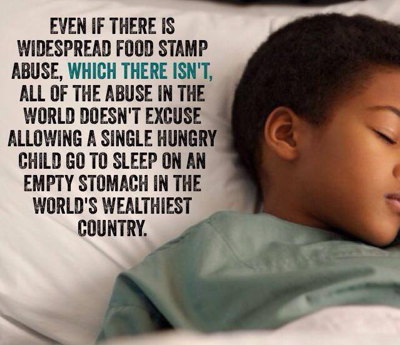 "The House of Representatives passed a new version of the farm bill Thursday that drastically intensifies the bipartisan attack against the working poor. The bill passed by 213-211, along party lines. The farm bill’s main aim is to slash food assistance to the more than 42 million people receiving aid under the Supplemental Nutrition Assistance Program (SNAP), formerly known as food stamps. While the farm bill, typically renewed every five years, provides crop subsidies and funding for food safety and other measures, more than three-quarters of the bill’s goes to the SNAP program.

The Congressional Budget Office estimates that more than 400,000 would immediately lose SNAP benefits under the bill’s passage. According to the Center on Budget and Policy Priorities, up to 1 million households are projected to lose access to the SNAP program altogether over the lifetime of the bill. Overall, this would eliminate food assistance for more than 2 million people, according to CBPP.

The bill includes a sweeping proposal to impose severe penalties on those who fail to prove within a limited timeframe that they have worked or participated in work programs for enough hours each month, or that they qualify for an exemption from the bill’s work requirements. Food assistance will be taken away for a full year the first time this occurs and for three years the second time.

Exhibiting the same brazen cynicism with which he recently presented a House bill pumping billions into the US border patrol’s anti-immigration dragnet, House Speaker Paul Ryan proclaimed that the farm bill would actually be a boon to the working poor. “This bill includes critical reforms to nutrition benefits that close the skill gap, better equip our workforce, and encourage people to move from welfare to work, so more Americans have the opportunity to tap into the economic prosperity we’re seeing right now,” Ryan said.

Under the new bill, if a recipient fails to work a minimum number of hours per week or attend job training programs, they will have their benefits eliminated for a full year. If they fail to meet work and training requirements a second time, assistance will be cut off for a full three years.

In reality, the bill is designed not to help employ food stamp recipients at decent wages—an impossibility in a society with historically high levels of wealth inequality and low wages—but to drive millions off food stamp assistance altogether in order to continuously defund and eventually eliminate the program.

The House vote came in the midst of a major initiative currently underway in Washington to restructure the federal government to put an end to what remains of the social safety net relied upon by millions of Americans who are struggling to meeting nutritional, health care, housing and other basic needs.

The SNAP program cost the federal government $70.9 billion in fiscal year 2016 and supplied an average of $125.51 per month in food assistance to each recipient. By contrast, the Department of Defense received $521.7 billion in funding during that same period. In other words, nearly 7.5 times the amount spent on feeding the population was spent on building new bombs, fighter jets and other killing apparatuses for America’s criminal wars abroad.

Under Trump, the Defense Department’s budget has increased to $681.1 billion while cuts have already been made to the SNAP program totaling $191 billion over the next 10 years. President Trump couldn’t contain his excitement over the new SNAP bill in a tweet sent out Thursday: “Farm Bill just passed in the House. So happy to see work requirements included.”

As the bill’s authors are well aware, millions receiving assistance receive it precisely because they face the type of precarious unemployment that has become a characteristic feature of the United States’ supposed “economic recovery.” Many are compelled to work in part-time, temporary jobs in the so-called gig economy where hours scheduled often are less than 20 hours per week.

Moreover, the new bill makes no allowance for those who are unable to work due to disability or chronic health conditions. Two-thirds of all recipients are elderly, disabled or children under the age of 18. Many recipients receive food stamp benefits while also providing care for a family member or loved one who is unable to work.

While House Democrats voted against the Farm Bill, there has been no outcry from their ranks over the new proposed work requirements for SNAP. The latest cuts only intensify a now decades-long bipartisan attack on the SNAP program.

The “work for food” program requirement began under Democrat President Bill Clinton’s 1996 welfare reform initiative. The Obama administration enacted massive cuts to the SNAP program. In 2014, Barack Obama signed a bill including $8.6 billion in cuts to SNAP and which eliminated benefits for hundreds of thousands of the working poor.

The Senate will likely begin voting on its version of the Farm Bill as soon as next week with a final congressional bill likely to appear on President Trump’s desk for passage before September.”
- https://www.wsws.org/en/articles/2018/06/25/farm-j25.html
○
So... $681.1 billion this year for "defense, as well as the $21 TRILLION missing and unaccounted for by DOD. A minimum of $16 TRILLION given to the scum bankster psychopaths to bail them out. But there's no money for hungry people, right? WE are a goddamned disgrace! Shame on us all for allowing this...
Posted by CoyotePrime at 12:30 PM