Chet Raymo, “To Love The Darkness” 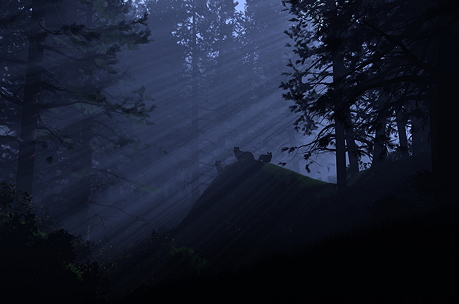 “To Love The Darkness”
by Chet Raymo

"You darkness, that I come from,
I love you more than all the fires
that fence in the world,
for the fire makes
a circle of light for everyone,
and then no one outside learns of you.
But the darkness pulls in everything:
shapes and fires, animals and myself,
how easily it gathers them! -
powers and people -
and it is possible a great energy
is moving near me.
I have faith in nights."

"I have long pondered these verses by the poet Rainer Maria Rilke (here translated by Robert Bly). I think I first mentioned them in something I wrote 25 years ago. Perhaps I have quoted them previously on this blog. The words seem shocking, somehow. Human have a terrible need to know. We invent stories and myths to explain away our ignorance. And sometimes, because we are unwilling to say "I don't know," we turn our stories into Truths. Knowledge then becomes a fence that seals us off from most of what exists.

Consciousness has arisen out of the dark abyss of time. We see the flame that burns around us: birds, insects, grasses, and flowering plants - tens of millions of species of living things. We are in it up to our necks. A zillion bacteria inhabit our guts. Mites creep in the forests of our eyelids. Viruses swim in our blood. We depend utterly upon plants to capture the energy we get from the sun. An uncountable number of creatures that live in the sea maintain the air we breathe.

But what of the darkness that we came from? The billions of years of hidden history, the patient crafting of complexity, the long unfolding of diversity? Every cell of our bodies remembers the eons; we are related to every organism on Earth by common descent. Our atoms are the dust of stars.

We split open sedimentary rocks along their seams and spill fossils into the light after millions, or billions, of years of darkness. Like hieroglyphics on the walls of a newly opened Egyptian tomb, the fossils are a record of our past. "The past is continually erased, and the record of the most distant time survives only by a chain of minor miracles," writes the paleontologist Richard Fortey. What other wonders await us in the unopened pages of sedimentary rocks? "One of the glories of the fossil record is that it continually surprises," says Fortey. We look into the dark abyss of time and are made humble in the face of what we do not know.”
- http://blog.sciencemusings.com/
Posted by CoyotePrime at 1:23 AM