"Central bankers are now in the denial and anger stages of Kubler-Ross’s famed stages of loss: denial, anger, bargaining, depression and acceptance. Central bankers are in denial that all their trillions of dollars, euros, yen and yuan have completely and utterly failed to achieve the desired result: “organic” (i.e. unmanipulated by central states/banks) expansion of productivity, investment and household earnings. 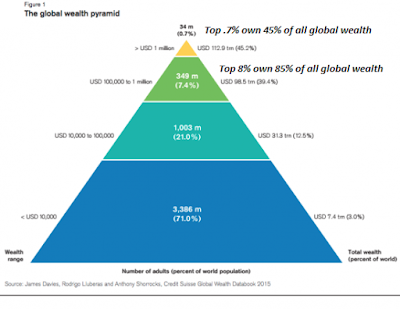 Click image for larger size.
Central bankers not only continue to insist their free money for financiers will eventually “trickle down” to the masses–they’re angry that the masses aren’t buying it. Central bankers are now blaming the masses for maintaining a perverse psychological state of disbelief in the omnipotence of central banks and their policies. Central bankers are raging at the psychology of hesitant households, which they finger as the cause of global weakness: if only people believed everything was great, they’d borrow and blow tons of money, and the ship would leave port with a full head of steam.

The central bankers have spent nine years constructing “signals” that are supposed to create a psychological state of euphoria that leads to more borrowing and spending. The stock market is at all-time highs–don’t those stupid masses get it? That’s the “signal” that all’s well and they should get out there and borrow more money to enrich the banks!

Central bankers’ anger is not directed at the source of the policy failures– themselves– but at the masses, whose BS detectors suggest all the signals are manipulated and therefore worthless. The skeptical psychology of the masses is akin to the mark at the 3-card monte table: the crooked dealer (in this case, the central banks) has let the mark win a few rounds to “prove” the game is honest, but the mark remains skeptical.

This is infuriating central bankers, who counted on the marks falling for the rigged game. This wasn’t supposed to happen, they rage; the Keynesian bag of tricks was supposed to work. Stage-managed perception (i.e. rising markets mean the economy is healthy and vibrant) was supposed to trump reality (i.e. the economy is sick, dependent on the dangerous drugs of debt and speculation).

Next up: bargaining. Central bankers are kneeling at the false gods of the Keynesian Cargo Cult and saying that they’ll offer “helicopter money” (more fiscal stimulus) if only the financial gods restore “growth.” They hope that by being “good central bankers” the gods will delay the inevitable destruction of their empires of debt.

There are now signs of debilitating depression in central bankers. The failure of their policies is finally sinking in, and central bankers are sagging under the depressing reality. They look somber, freeze up at the microphone, and have withdrawn from “whatever it takes” euphoria as they realize that another round offree money for financiers and manipulated markets will only make the problems worse and erode what’s left of their crumbling credibility.

Only when central bankers accept the complete and utter failure of their policies and accept the reality that their policies have increased wealth inequality and crippled the global economy with debt, speculation and manipulation, can we finally move forward. Until then, we’re stuck with the world central bankers have created: a world of rising wealth and income inequality, of permanent manipulation of markets as a means of managing perceptions and of speculative debt/leverage bubbles that will burst with a ferocity few expect or understand.”
- http://www.washingtonsblog.com/
Posted by CoyotePrime at 6:28 PM