"The Heroin of 'Signing Up'” 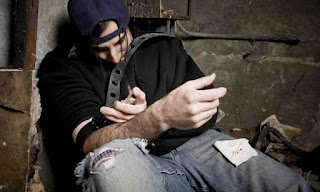 "The Heroin of 'Signing Up'”
by Eric Peters

"A good friend urges me to “sign up” for Obamacare. He knows about the extortion letters I have been receiving from the federal thugs who are now the enforcers for the health insurance mafia – which succeeded in getting a law passed which forces us to buy their services. Or else. The “or else” being punishing fines – plus interest. These are called “shared responsibility” payments but – in the first place – nothing is being “shared” (I am being forcibly mulcted) and in the second place - for whom am I “responsible”? Myself, certainly.

But that is precisely the point and the fulcrum of my objection to Obamacare – to this business of being forced to be responsible for other people’s “care” at the expense of my own. I could afford a high-deductible, catastrophic care insurance policy – something which would “cover” just that, a catastrophic and therefore not-likely event, such as a heart attack or cancer. And precisely because such an event is unlikely, the cost of such a “plan” would actually be insurance and so affordable. I could therefore afford to be responsible for myself.

But Obamacare has turned the concept of insurance on its head. What is going on now is not insurance. It is wealth redistribution – mostly to the insurance mafia. The law forces me – and you – to pay for things we don’t need or use (for example, maternity care “coverage” for a divorced middle-aged man and “substance abuse counseling” for a man who doesn’t abuse any substances) which means no value received for the money extorted. The money lines the pockets of the mafia, which may perhaps dole out a portion to “cover” some portion of other people’s maternity care or substance abuse counseling.

I resent being mule-hitched to the insurance mafia’s profit wagon and also having the bit shoved into my mouth so that I may be forced to pull other people’s wagons rather than my own wagon – the only wagon for which I am morally “responsible.”

Which brings me back to my dilemma – and my friend’s solution. Obamacare has made it financially impossible for me to afford “coverage” and so am not “covered,” which makes me all of a sudden a criminal for seeking to take care of myself and not filch other people’s pockets.

For this I am the object of punishment – like any criminal – except I fail to see how I am one given I’ve harmed no one. Not even myself – and even if I do harm myself, that is a matter between me and myself – the aggrieved party. Certainly I have aggrieved no one else, assuming I am not the property of someone else. Which of course I am, apparently. And you, too. We will get to that momentarily.

At any rate, I am the object of punishment. “Shared responsibility”  fines – technically, taxes – which is how the federal thugs legitimated the illegitimate, arguing that the Congress (more thugs) having empowered themselves to tax us – that is, to steal our money as and how they wish, by voting to do so – therefore has the power to vote to tax us for failing to send money to the insurance mafia as ordered by their other edict.

So, $695 so far –  plus interest, accumulating. My punishment for failing to be “covered” last year. It will be another $695 plus interest for this year, too. I cannot afford this, either – not without being unable to afford the care I actually do need, such as the old filling I just had replaced and the crown I had to have done last year, which together cost me about what my “shared responsibility” payment would be for last year and this year except I decided to be responsible for myself instead.

My friend urges me to “sign up” for Obamacare” on the “exchanges.” He says it will cost less – and by “signing up” I will avoid the “shared responsibility” fines (taxes) going forward. This is all true – but entirely beside the point. Or rather, it is exactly the point.

If I “sign up,” I will be as Lee at Appomattox. I will have surrendered. I will have accepted the idea that I am not a sovereign individual who owns himself absolutely – and the corollary of that, which is the absolute right of others to ownership of themselves. That we are each free individuals, responsible for ourselves and our actions only. Not for the actions of others, nor they for ours. If we “sign up,we have accepted that we are all somehow each others’ collective property and as such are subject to being used and controlled by our owners, just like a mule or any other form of property. That we are enslaved – to each other.

This is why I will not “sign up” – in the spirit of Giles Corey, the refusnik of Salem Witch Trials fame, who declined to go along to get along by witnessing falsely against his neighbors. More weight was all he said – with a contemptuous smile – as his tormentors attempted to get him to “share responsibility” by piling stones upon his chest.
If it comes to it, they can do that to me as well.

I won’t go to the “exchanges.” Will not voluntarily send a single penny of my money to the cretinous insurance mafia. I will not pay the “shared responsibility” tax, either.

I will continue to be responsible for myself.

If that makes me a criminal in a system gone criminal, so be it.