“Recognized since antiquity and depicted on the shield of Achilles according to Homer, stars of the Hyades cluster form the head of the constellation Taurus the Bull. Their general V-shape is anchored by Aldebaran, the eye of the Bull and by far the constellation's brightest star. 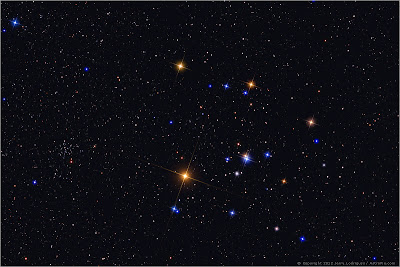 Click image for larger size.
Yellowish in appearance, red giant Aldebaran is not a Hyades cluster member, though. Modern astronomy puts the Hyades cluster 151 light-years away making it the nearest established open star cluster, while Aldebaran lies at less than half that distance, along the same line-of-sight. Along with colorful Hyades stars, this stellar holiday portrait locates Aldebaran just below center, as well as another open star cluster in Taurus, NGC 1647 at the left, some 2,000 light-years or more in the background. Just slide your cursor over the image to identify the stars. The central Hyades stars are spread out over about 15 light-years. Formed some 800 million years ago, the Hyades star cluster may share a common origin with M44 (Praesepe), a naked-eye open star cluster in Cancer, based on M44's motion through space and remarkably similar age.”
- http://apod.nasa.gov/apod/ap121224.html
Posted by CoyotePrime at 5:36 PM