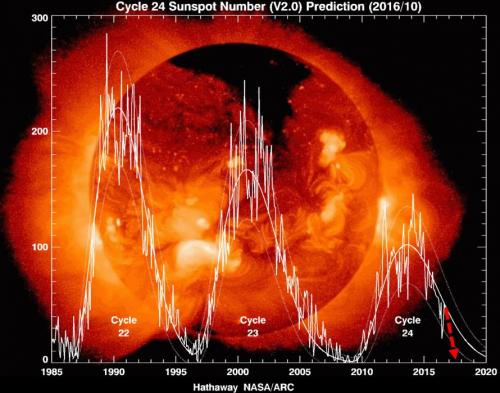 "Earth's 'Big Freeze' Looms As Sun Remains
Devoid Of Sunspots For Most Of 2018"
by Mac Slavo via SHTFplan.com

"Scientists believe that Earth could experience a “big freeze” as the sun goes through what’s known as “solar minimum.” During this time, sunspots are minimal and the globe could be in for a wicked cold snap. Scientists are reporting that the sun has been free of sunspots for a total of 133 days this year, according to The Express UK. With only 241 days of 2018 passing, that means the sun has been blank for the majority of the year. Experts continue to warn that this is a sign that the solar minimum is on its way.

“The sun is spotless again. For the 133rd day this year, the face of the sun is blank,” wrote the website Space Weather. “Solar minimum has returned, bringing extra cosmic rays, long-lasting holes in the sun’s atmosphere, and strangely pink auroras,” the website continued.

The sun follows a cycle of roughly 11 years where it reaches a solar maximum and then a solar minimum. During a solar maximum, the sun gives off more heat and solar particles and is littered with sunspots. Less heat in a solar minimum is due to a decrease in the sun’s magnetic waves.  Our sun was not expected to head into a solar minimum until around 2020, but it appears to be heading in that direction a little early which could prove to be bad news for warm weather lovers.

But a prolonged solar minimum could mean a “mini ice age.” The last time there was a prolonged solar minimum, it did, in fact, lead to a mini ice-age which was scientifically known as the Maunder minimum.  That little cold snap lasted for 70 years between the years 1645 and 1715. During this period, temperatures dropped globally by 1.3 degrees Celsius leading to shorter seasons and ultimately food shortages.

“Low solar activity is known to have consequences on Earth’s weather and climate and it also is well correlated with an increase in cosmic rays that reach the upper part of the atmosphere. The blank sun is a sign that the next solar minimum is approaching and there will be an increasing number of spotless days over the next few years,” wrote a meteorological website called Vencore Weather."
- https://www.zerohedge.com

○
Related:
"Following Record Heat This Summer,
Experts Are Predicting There Will Be A Nightmarishly Cold Winter"
Posted by CoyotePrime at 8:44 PM