“Labor Day Gets No Respect” 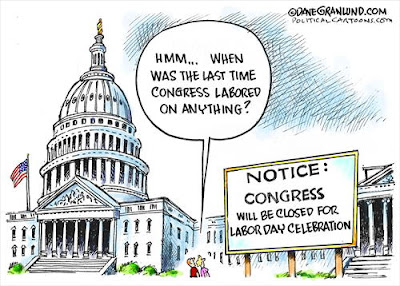 “Labor Day Gets No Respect”
by Will Durst

"Let us take a few minutes to talk about the most underrated holiday of them all: Labor Day. Poor baby. It gets less respect than a MAGA hat at a Bernie Sanders rally. Like a half-eaten chocolate chip cookie in the Great British Bake Off. Or a Super Soaker at a Northern Idaho gun show. The trailer for a Pauly Shore movie at the Tribeca Film Festival.

We treat it as the runt of the holiday litter without any proscribed traditions. Every year we wing it. No fireworks or clock-watching countdowns. No designated animal to eat or steal chocolate eggs from. No piece of vegetation to kill and either trim or gut. Maybe a couple parades so that politicians can get some waving-from-a-convertible exposure two months before the election. But that’s about it.

Probably got something to do with being the seasonal signpost for closing the door on summer and staring down that long cold hallway to the deep dark heart of winter. The First Monday of September means the fun has expired and a big dollup of dreary is in the offing. The darkening of the light is nigh. The dividing line between wanton abandon and studious application. Raking dead leaves versus cutting verdant lawns.

The last pair of swim trunks has been worn outdoors and corduroy jackets are being pulled out of boxes from the basement. Time to take down the screens and chop a big cord of wood. Watermelons are replaced with pumpkins on the floor next to the produce bins. And holy moley catfish, there will be pumpkin. Spices, pies, dental floss, yogurt, vodka and Smashed Pumpkins marathons on the radio.

What we tend to forget is the meaning of Labor Day. Twenty- four hours we set aside to honor not the dead, but the living. This is not a paean to grieving heroes who have left us, but rather rejoicing at being a part of a larger functioning whole. Because when Americans pull together, we can accomplish anything. Even estimating the timing of the coals for a perfect medium rare Porterhouse.

It’s a calendaric conundrum. To celebrate what it is we do for a living by taking the day off. Just one day out of 365 for the nine to five heroes that keep this country humming so they can sit back, relax and enjoy that unique moment where it’s okay to toss around both the baseball and the football. To hang with families and friends before squaring our shoulders and getting back to the job of earning a living and carving out the future. Democracy isn’t easy. Takes a strong back and an indomitable will. And pumpkin spiced lattes.

So Happy Labor Day everybody. Have a great one. Wear your flip-flops. Tap a keg. Char some hot dogs. Because this ain’t no patent leather shoes, champagne and caviar kind of holiday. This is the real red, white and blue deal.

A quick vacation for all of us; blue collar, white collar, clergy collar, no collar, dog collar. For anyone who’s ever busted their butt to put some food on the table and cover a mortgage with maybe a little left over for a 10 year-old’s birthday party featuring an appearance by some college student dressed as Spiderman.

Email ThisBlogThis!Share to TwitterShare to FacebookShare to Pinterest
Labels: will durst