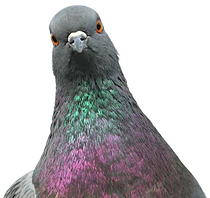 "Trouble ahead, Lady in red,
Take my advice you’d be better off dead.
Switchman’s sleeping, train hundred and two is
On the wrong track and headed for you."
– “Casey Jones,” Grateful Dead *

POITOU, FRANCE – "And so… the trains gather speed. The Ol’ Deep State Cannonball is chugging up from Washington… and the Manhattan Money Machine is barreling down from New York – headed straight for each other. Our guess: When the two meet up, there will be Hell to pay.

Stool Pigeons: By the end of last week, the folks on the political train had a new source of entertainment – a singing trio known as the “Stool Pigeons.” Yes, Dear Reader, three of the president’s oldest and closest advisors have now “flipped.” Singing tenor is Michael Cohen, Trump’s personal lawyer and former “punching bag.” And now, he’s been joined by Trump’s old pal, David Pecker, singing bass. Pecker, publisher of the esteemed literary journal, National Enquirer, is said to have a whole safe full of hot torch songs, including “Is That All There Is?” by Karen McDougal and “You Gotta Give Me More Than That” by Stormy Daniels. The third member of the trio is CFO of The Trump Organization, Allen Weisselberg, already famous in some music circles for his Nixon-era hit, “Follow the Money.”

The trio will do a medley of songs. Most of these tunes follow the usual formula: Boy meets girl. Boy gets girl between the sheets. Boy pays girl to keep quiet about it. Boy and his fixers figure out how to disguise payment. But they get sloppy and, apparently, breach federal campaign finance laws. This is bound to be a big hit; they’re sure to win a Grammy. And it’s not hard to figure out why. After all, we’ve all been there, right?

Trouble Ahead: Among the tunes we haven’t heard yet on primetime will be some that are already well known in the bars and nightspots of the Big Apple. “Sleazeball,” for example, is a song about greasy business deals between greasy business people on both sides of the East River. Stiffing creditors… using bankruptcy to avoid paying bills… tax avoidance (evasion)… lying… phony invoices – all the usual stuff.

The New York Times and The Washington Post will hope to get a song or two on the Russian election interference theme, too. But our guess is that the trio doesn’t have any material on that subject; if any really damaging info was available, it would have come out by now. Most likely, there isn’t any. And most likely, the whole election interference jingle is a waste of time. Of all the seedy people who tried influencing the 2016 presidential election, the Russians were probably among the least of them.

And thus, distracted with silly ditties and fulminating gossip – “drinking coffee and smokin’ big cigars”… switchman sleeping – hardly anyone aboard either train bothers to look out the window. If they were to do so, they might want to slow down. From Bloomberg: "Federal Reserve Chairman Jerome Powell said the fundamentals of the U.S. economic expansion look strong and support the case for continued gradual interest-rate increases. “There is good reason to expect that this strong performance will continue,” Powell said Friday in remarks prepared for the Kansas City Fed’s annual policy symposium in Jackson Hole, Wyoming. “I believe that this gradual process of normalization remains appropriate.”

The Fed chairman must tantalize the gods. They must surely see a fool… and race ahead to set a trap. Normalization (Mistake #2) means higher real interest rates (it is not normal to lend money below the rate of inflation). But the whole world economy – especially the U.S. government – now depends on the Fed leaving rates abnormally low (Mistake #1).

The feds are now running deficits of about $70 billion a month. As the Fed proceeds with its quantitative tightening program, it will increase the feds’ borrowing costs and drive up interest rates. Crash ahead!

Dreadful Math: Remember, credit is offered by the financial industry. But debt is paid by Main Street industries. So small increases in interest rates can have big consequences in the real world. There is about $250 trillion in debt outstanding globally. So even a 1% increase in interest adds $2.5 trillion in financing costs worldwide. That money must come from either issuing more credit or leaving less output for other things. But central banks are cutting back on credit issuance. And global output is only about $90 trillion total. Here is the dreadful math of excess debt.

Every 1% move in interest rates equals almost 3% of global GDP being diverted to servicing debt: In the U.S., total debt – compared to GDP – is even higher. Every 1% increase in interest rates means more than a 4% extra charge to the real economy. That’s why it doesn’t take a very big move in the credit cycle to bring down the whole economy.

Recession ahead! And then, there’s the trade war. That, too, comes with alarms ringing all up and down the tracks. Today, there is little chance of a real “win” in a trade war (tariffs are already low… other barriers are more complex… and not easy to deal with). But there is a pretty good chance of a catastrophic “lose.” That’s because the aforementioned $250 trillion of world debt depends on the aforementioned $90 trillion of GDP, which depends on trade at today’s levels. Anything that reduces trade also reduces GDP… and makes it harder to keep up with the debt repayments. So, watch out… There’s trouble ahead. Stay tuned…"
- https://bonnerandpartners.com/
○
* Since you insist...
Posted by CoyotePrime at 11:23 AM