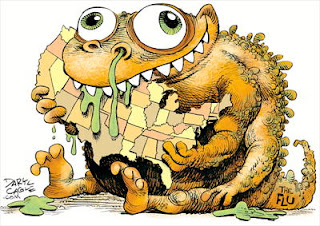 "Antibiotics Versus Appendectomies"
May The Best Treatment Win!
by Danny Tyree

"I’m not a doctor. I don’t even play one in newspapers. (So, relax, Rex Morgan, M.D. But look out, big-nosed kid who likes to fly his Sopwith Camel in search of the Red Baron. You’ve got competition.) On the other hand, I do enjoy passing along encouraging medical news when I am fortunate enough to encounter it – and/or when my DEADLINE is a preexisting condition that gives me heart palpitations.

According to the Associated Press, a new study from Finland shows that nearly two-thirds of appendicitis patients would do as well using antibiotics instead of undergoing emergency surgery. Researchers focused on adults but speculated that children would enjoy similar benefits – unless Johnny and Suzy fought over who got the bigger bottle of antibiotics. (“You’ve always medicated him more!”)

The AP story was headlined “Antibiotics for appendicitis? Surgery often not needed,” but my anonymous sources (who were nearly 45 percent right about Brett Kavanaugh and the tongue depressor) say editors considered the title “Surgeons’ cash cow about to burst!” Yes, for decades, rushed-up appendectomies have been the well-meaning medical profession’s “go to” solution for tell-tale abdominal pain. “Go to” as in “Let’s go to Aruba, honey! KA-CHING!” (The AP said appendix removals are the most common emergency surgery worldwide, with 300,000 performed annually in the U.S. alone.)

Now, better imaging tests help hospitals decide which appendixes are really likely to rupture and which are treatable by less invasive methods. And which bank accounts can handle the additional out-of-network costs. (“Multiple crisp, clear images of Benjamin Franklin! Mmmmm… .”)

My wife the college biology teacher was not surprised by the research from Finland. She said she shared similar studies with her class four or five years ago; but old habits die hard and most people are still resigned to being wheeled into an operating room at the first sign of trouble.

Mrs.Tyree is particularly perturbed by the cavalier, now-disproven belief that the appendix is just a discardable vestigial organ. Science now realizes that it houses the body’s GOOD BACTERIA. So, appendectomies were sort of an early form of gentrification. (“Here’s your eviction notice, good bacteria. You can live on the street or something. Probably make some spare change washing windshields at intersections.”)

If you ever suffer from appendicitis, I hope you have an up-to-date, honest doctor who will give you all your options. But cynicism about the surgical-industrial complex lingers. There’s even a monthly magazine called “What Doctors Don’t Tell You,” although after six years of publication, they’re down to chastising doctors for leaving unanswered questions such as “Who put the bomp/In the bomp bah bomp bah bomp/Who put the ram/In the rama lama ding dong?”

Let’s hope your doctor is conscientious enough to follow the Hippocratic Oath. (“Neither snow nor rain nor heat nor gloom of night stays these couriers from the swift completion of – wait! That’s not it! No wonder I got sued for malpractice for sewing that manila envelope inside Mrs. Murgatroyd.”)

Knock on wood, I’ve never had appendicitis. Or tonsillitis. I even still have my wisdom teeth. But if funeral homes and crematories start charging the same way airlines do, I might try shedding some excess baggage at the last minute. (“Quick! I’m fading fast and the ambulance will be here any minute. Can I remove my spleen by tying it to the doorknob?”)
- https://www.cagle.com/danny-tyree/
Posted by CoyotePrime at 10:19 AM