"Senate To Be Replaced With Room Full Of Monkeys Throwing Feces" 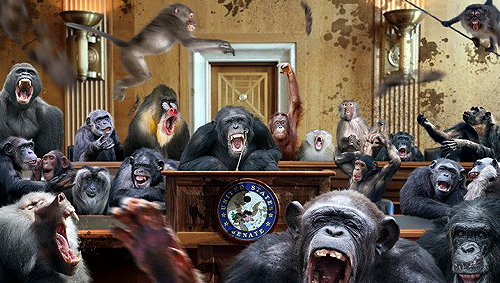 WASHINGTON, D.C. - "In an emergency, overnight referendum, the American people voted on Thursday to replace the United States Senate with a room full of monkeys throwing feces. The measure passed with 57% of the vote. 22% of voters thought the Senate should be replaced by barking seals, while 17% voted that the replacement should be the pit of venomous snakes from Indiana Jones. 3.97% voted that Senate members be replaced by screaming goats. “About 100 people” voted for the current Senators to keep their jobs, with this tiny voting bloc centered in Washington, D.C.

Highland Ape Rescue out of West Virginia will be teaming up with Cornwell Primate farms to supply hundreds of monkeys and apes to the Senate. The animals will be fed a nutritious mixture of foods that produce easily throwable feces. Protective glass will be put up around the Senate for camera crews to safely film, but anyone being interviewed by the new senators will have to sit in the middle of the poo-flinging octagon, coming under a heavy barrage of projectile excrement. “It will be a huge improvement from how things were before,” said ape trainer, Marlena Henwick. “No more 10-12 hour hearings. With these monkeys, all the fecal projectiles will have been flung in under 30 minutes. One and done.”

The recently replaced senators will be placed on display at the National Zoo in Washington, D.C. for families to park, attendees to observe, and zoologists to study."
- https://www.theburningplatform.com/
- https://babylonbee.com/news/

The graphic looks like them now...
Posted by CoyotePrime at 2:17 PM