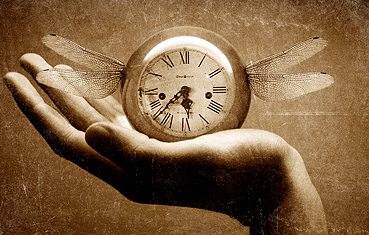 "We are food for worms, lads," announces John Keating, the unorthodox English teacher played by Robin Williams in the 1989 film "Dead Poets Society." "Believe it or not," he tells his students, "each and every one of us in this room is one day going to stop breathing, turn cold, and die."

The rallying cry of their classroom is "carpe diem," popularized as "seize the day," although more literally translated as "pluck the day," referring to the gathering of moments like flowers, suggesting the ephemeral quality of life, as in Robert Herrick's "To the Virgins, to Make Much of Time," which begs readers to live life to its full potential, singing of the fleeting nature of life itself:
"Gather ye rosebuds while ye may,
Old Time is still a-flying;
And this same flower that smiles today
Tomorrow will be dying."

The Latin phrase carpe diem originated in the "Odes," a long series of poems composed by the Roman poet Horace in 65 B.C.E., in which he writes:
.
"Scale back your long hopes
to a short period. While we
speak, time is envious and
is running away from us.
Seize the day, trusting
little in the future."

Various permutations of the phrase appear in other ancient works of verse, including the expression "Eat, drink, and be merry, for tomorrow we die," which is derived from the Biblical book of Isaiah. At the close of "De rosis nascentibus," a poem attributed to both Ausonius and Virgil, the phrase "collige, virgo, rosas" appears, meaning "gather, girl, the roses." The expression urges the young woman to enjoy life and the freedom of youth before it passes.

Since Horace, poets have regularly adapted the sentiment of carpe diem as a means to several ends, most notably for procuring the affections of a beloved by pointing out the fleeting nature of life, as in Andrew Marvell's "To His Coy Mistress":
.
"Now let us sport us while we may,
And now, like amorous birds of prey,
Rather at once our time devour
Than languish in his slow-chapt power."

Other approaches to carpe diem encourage the reader to transcend the mundane, recognize the power of each moment, however brief, and value possibility for as long as possibility exists. In "A Song On the End of the World," the poet Czeslaw Milosz asserts that the world has not yet ended, though "No one believes it is happening now," while Rainer Maria Rilke's poem "Archaic Torso of Apollo" famously ends with the directive "You must change your life." Emily Dickinson's poem "I tie my Hat—I crease my Shawl (443)" boasts that the reward of life is to "hold our Senses," and the French poet Charles Baudelaire offers the advice to "Be Drunk," though not necessarily on alcohol: "Wine, poetry or virtue, as you wish. But be drunk."

Not all carpe diem poems instruct, however. The poem "The Layers" by Stanley Kunitz offers advice through the poet's first hand experience:
.
"In a rising wind
the manic dust of my friends,
those who fell along the way,
bitterly stings my face.
Yet I turn, I turn,
exulting somewhat,
with my will intact to go
wherever I need to go,
and every stone on the road
precious to me."

In a similar manner, many contemporary poems offer reminders about life's overlooked pleasures, such as those found in the warm summer evening of Tony Hoagland's poem "Jet":
.
"We gaze into the night
as if remembering the bright unbroken planet
we once came from,
to which we will never
be permitted to return.
We are amazed how hurt we are.
We would give anything for what we have."

Carpe diem remains an enduring rhetorical device in poetry because it is a sentiment that possesses an elasticity of meaning, suggesting both possibility and futility. Many poets have responded to the sentiment, engaging in poetic dialogues and arguments over its meaning and usefulness. Robert Frost briefly considers the notion of living in the present in a poem appropriately titled "Carpe Diem." He concludes, however, that "The age-long theme is Age's" and ends the poem with his own sentiment, that one should seize tomorrow, not today:

"But bid life seize the present?
It lives less in present
Than in the future always,
And less in both together
than in the past. The present
Is too much for the senses,
Too crowding, too confusing—
Too present to imagine."

The existential dilemma suggested by carpe diem includes a sense of helplessness and senselessness, sentiments which are often expressed in a poet's resignation to a life filled with inexplicable losses and hardships. In Gerard Manley Hopkins's poem "Spring and Fall: To a young child," the poet warns that "as the heart grows older / It will come to such sights colder." However, Walt Whitman's poem "O Me! O Life!" represents a refusal to acquiesce to such interpretations of existence. Whitman calls the reader to the present moment, and demands something meaningful be attempted:
.
"The question, O me! so sad, recurring—What good amid these, O me, O life?
Answer.
That you are here—that life exists, and identity;
That the powerful play goes on, and you will contribute a verse."
- http://www.poets.org/viewmedia.php/prmMID/20258
Posted by CoyotePrime at 9:15 PM

Email ThisBlogThis!Share to TwitterShare to FacebookShare to Pinterest
Labels: poets.org