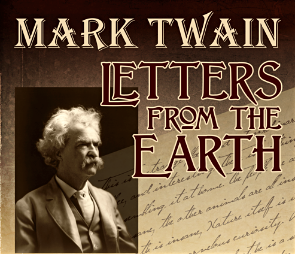 "Letters From the Earth"
by Mark Twain

"This is a strange place, an extraordinary place, and interesting. There is nothing resembling it at home. The people are all insane, the other animals are all insane, the earth is insane, Nature itself is insane. Man is a marvelous curiosity. When he is at his very very best he is a sort of low grade nickel-plated angel; at is worst he is unspeakable, unimaginable; and first and last and all the time he is a sarcasm. Yet he blandly and in all sincerity calls himself the "noblest work of God." This is the truth I am telling you. And this is not a new idea with him, he has talked it through all the ages, and believed it. Believed it, and found nobody among all his race to laugh at it.

Moreover - if I may put another strain upon you - he thinks he is the Creator's pet. He believes the Creator is proud of him; he even believes the Creator loves him; has a passion for him; sits up nights to admire him; yes, and watch over him and keep him out of trouble. He prays to Him, and thinks He listens. Isn't it a quaint idea? Fills his prayers with crude and bald and florid flatteries of Him, and thinks He sits and purrs over these extravagancies and enjoys them. He prays for help, and favor, and protection, every day; and does it with hopefulness and confidence, too, although no prayer of his has ever been answered. The daily affront, the daily defeat, do not discourage him, he goes on praying just the same. There is something almost fine about this perseverance. I must put one more strain upon you: he thinks he is going to heaven!"
Complete online "Letters From the Earth" is here:
- http://www.classicreader.com/book/1930/

Freely download "Letters From the Earth", in PDF format,  here:
- http://www.cs.umd.edu/~mvz/bible/ltrs-from-earth.pdf
◆
"Letters from the Earth" is a posthumously published work of celebrated American author Mark Twain (1835–1910). It comprises essays written during a difficult time in Twain's life (1904-09), when he was deeply in debt and had recently lost his wife and one of his daughters. The content concerns morality and religion and strikes a sarcastic - Twain's own term throughout the book - tone. Initially, another of his daughters, Clara Clemens, objected to its publication in March 1939, probably because of its controversial and iconoclastic views on religion, claiming it presented a "distorted" view of her father. Henry Nash Smith helped change her position in 1960. Clara explained her change of heart in 1962 saying that "Mark Twain belonged to the world" and that public opinion had become more tolerant. She was also influenced to release the papers by her annoyance with Soviet reports that her father's ideas were being suppressed in the United States. The papers were selected, edited and sequenced for the book in 1939 by Bernard DeVoto.

"Letters from the Earth" consists of a series of commentaries in essay and short story form. Many of these pieces express Twain's discomfort with and disdain for Christianity, both as a theological position and a lifestyle. The title story consists of eleven letters written by the archangel Satan to archangels Gabriel and Michael, about his observations on the curious proceedings of earthly life and the nature of man's religions. Other pieces in the book include a morality tale told as a bedtime discussion with Twain's children, Susy and Clara, about a family of cats, and an essay explaining why an anaconda is morally superior to Man."
- https://en.wikipedia.org/wiki/Letters_from_the_Earth
Posted by CoyotePrime at 8:00 AM