"The Two Paths To Collapse" 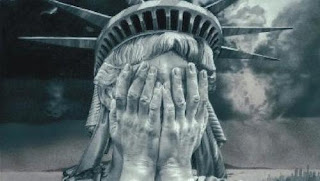 "The Two Paths To Collapse"
by Charles Hugh Smith

As a general rule, there are two paths to collapse: gradual erosion and sudden crash. The two are intertwined, of course; in most cases, the system slowly loses vigor, resources, efficiency, etc. (erosion) which leaves it so weakened that a crisis that would have easily been overcome in the past triggers a catastrophic decline of production and order. My new book explores these system dynamics in the present: "Pathfinding our Destiny: Preventing the Final Fall of Our Democratic Republic." As the title suggests, we've got a window to prevent the final descent, but it's years, not decades.

There are two basic drivers of systemic erosion, drivers that have little to do with leadership or policy. Our current delusion is that changing leaders and tweaking policies are enough to stave off systemic erosion, decline and collapse, but the two dynamics cannot be so easily thwarted.

The first is the gradual decline in the system's ability to adapt to changing circumstances. Life's core asset is the ability to evolve and adapt, and organisms, species and systems which fail to adapt fast enough and effectively enough to rapid change disappear. Today's modern complex systems are typically optimized to specific conditions, meaning that they've evolved (or been designed) to maximize production and output given a certain set of inputs and processes.

If those conditions shift outside the expected parameters, the system's efficiency and output are heavily eroded. To take a real-world example: airliners are designed to cruise at specific altitudes to maximize the efficiency of the engines and aircraft design while maximizing the cruising speed. If an airliner is forced to fly at an altitude of 500 feet instead of 35,000 feet, the optimizations are lost.

The vast majority of modern systems are heavily optimized in ways outsiders typically can't appreciate. The delivery of gasoline to service stations, for example, appears so streamlined that few even question that system's vulnerabilities to disruption. The system of delivery is optimized to high standards of transport and availability of fuel. Were anything to disrupt this system, most gas stations would run out of fuel in a matter of days. This vulnerability is masked by the effectiveness of the system's optimizations.

The path to sudden collapse is paved by increasingly narrow optimization. The system works perfectly until change shifts from being gradual (linear) to non-linear, at which point the apparently robust system collapses in a heap. Adaptability and optimization are on a see-saw: as a general rule, adaptability requires flexibility, buffers and redundancies that are costly to maintain. So in a world driven by efficiencies in service of maximizing profits, these costs have been ruthlessly eliminated from complex systems. The adaptability of optimized systems is very low unless they have been specifically optimized to be highly flexible and adaptive.

The second dynamic is the gradual rigging of the system to reward insiders, at the expense of its purported purpose and output. Insiders will naturally vehemently deny this (while accepting pay raises, higher benefits and bonuses even as the agency/institution fails), but this dynamic is the direct consequence of the structure of our dominant systems, which are virtually all centralized hierarchies.

Centralized hierarchies concentrate power and wealth in the hands of the few.Self-interest being what it is, these insiders naturally rig the system to protect insiders from criticism, reductions in budgets, etc. while increasing their own take of the spoils. We can see this in everything from corporate stock buybacks to the relentless expansion of overpaid university administrators while the actual teaching falls ever more heavily on debt-serf non-tenured poorly paid adjunct faculty.

In other words, the very structure of our systems guarantees their failure once conditions change beyond their limited ability to adjust. We already see the consequences of these two systemic dynamics everywhere in America: systems no longer function effectively even as insiders continue to benefit at the expense of the public/patients/customers /taxpayers. To avoid decline and collapse, we need to develop new localized structures optimized for resilience and adaptability - a flexible, decentralized, sustainable, democratic, opportunity-for-all nation."
- https://www.zerohedge.com/
Posted by CoyotePrime at 5:57 PM