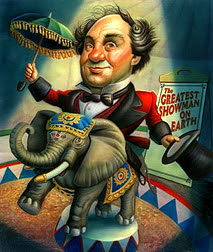 "Facts, Not Theories: P. T. Barnum"
By Herb Reich
"We all have our cherished theories about everything from famous quips to favorite cures, not to mention history. But the facts tell a different story. Did showman P. T. Barnum really say, “There’s a sucker born every minute.”?

No, he didn’t. Here’s how we fell for this misconception, according to the Barnum Museum: In 1868, a man named George Hull, of Binghamton, New York, arranged for a slab of gypsum to be carved in the shape of a huge human being, then had it treated to resemble an ossified corpse and buried it on a farm near Cardiff, New York. About a year later, the artifact was “discovered” when the owner of the farm engaged some friends to help dig a well. Newspapers everywhere picked up the story of the “Cardiff Giant,” and soon thousands of the curious were paying 50 cents apiece to view it. Hull sold part ownership to a group of investors led by a man named Hannum, who moved the giant to Syracuse and doubled the admission fee.

Barnum made an offer to buy the giant but was turned down. Not to be outdone, he had a duplicate giant carved, which he exhibited, claiming Hannum had sold the original to him and had replaced it with a fake. Newspapers picked up Barnum’s version, and the crowds started coming to see his giant. It was then that Hannum- not Barnum- was quoted as saying, “There’s a sucker born every minute,” assuming his giant was real and the thousands paying to see Barnum’s fake were being ripped off. Hannum sued Barnum for calling his giant a fake. In court, the original hoax was revealed, and the judge ruled for Barnum, finding that Hull’s Cardiff Giant was a fake and Barnum was thus not guilty of anything. Hannum and Hull have long since been forgotten, but the “sucker” quote has stuck to Barnum- who was nobody’s fool."
- http://www.rd.com/
Posted by CoyotePrime at 3:20 PM