"Oh, Yes, It Can Get Worse Than This" 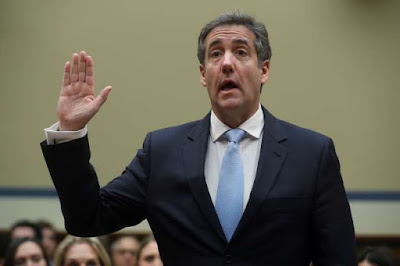 - https://www.msn.com/en-us/news/
○
"Oh, Yes, It Can Get Worse Than This"
by David Stockman

"It’s as reasonable an explanation as any you’re likely to hear from Bubblevision, so here goes…Markets sagged early today, as Michael Cohen, the Donald’s ex-consigliere, testified before the House Oversight and Reform Committee. Like most of the nonsense served up by CNBC and Fox Business as well as Bubblevision’s political organs, there is some measure of plausibility to that explanation. Indeed, Imperial Washington is Wall Street’s keeper. And the Donald has taken that particular oath very personally; you can use his Twitter feed to monitor the major stock indexes.

So, when the folks we elect to represent us in Congress allow spectacles such as we saw today, there’s reason to question the long-term viability of the American Empire. This hearing was about “power” and “not power,” just another indication that this ain’t no constitutional democracy anymore. Leviathan has been unchained. And there are virtually no checks left on the growth of the State and the abuse of its powers for self-serving political purposes.

For decades and decades, Republicans and Democrats have taken turns milking the Imperial Presidency for partisan ends under the cover of promoting the public good. So, they’ve taken off their masks of concern and their patriotic costumes. It’s “anything goes” when it comes to the abusive appropriation of the agencies and powers of the State in behalf of reelection. And they threaten to bring the house down on their own heads. They picked the wrong circumstances and the wrong moment in history to stage their naked, unconstitutional battle for political power.

This weak and old “recovery” – and the massive financial bubble surfing on top of it – is a function of misguided State intervention. It’s a product of unending “stimulus” via soaring public debt and massive money-printing. Yet, as we’ve often discussed, no one has outlawed the business cycle. So, it’s certain this “recovery” will end, and this bubble will burst. That’s notwithstanding the coddling and capitulation that may issue from the Eccles Building when the end comes.

This time, the inevitable financial crash and Main Street recession won’t be short-circuited by the bailout brigades. That’s because the Fed is out of conventional ammunition, while even its unconventional weapons are of dubious effectiveness. And Imperial Washington will continue to devolve into bitter partisan warfare, dysfunction, and paralysis.

This time, you won’t hear about Donald Trump bending the knee to ask Nancy Pelosi for a $700 billion Wall Street bailout. This time, there will be no V-shaped rebound. The Tweeter-in-Chief will face a vicious political assault for failed economic policies. A recession-bloated federal deficit will be plunging toward the $2 trillion annual rate. We’ll need a partisan support for the painful measures needed to stem the red ink. But there will be no bipartisan consensus for anything – neither to curtail the exploding national debt nor to stimulate the sinking national economy.

Fear and loathing will prevail. Traders and speculators on Wall Street will be helpless, as grifters and carnival-barkers battle in Imperial Washington. Remember, the Donald is a megalomaniacal street fighter like no other. It’s fair enough to assume that today’s sh*tshow is just a warm-up round for what’s coming…"
- https://www.deepstatedeclassified.com/
○
Freely download "The Leviathan", by Thomas Hobbes, here:
- https://www.ttu.ee/public/
Posted by CoyotePrime at 3:41 PM