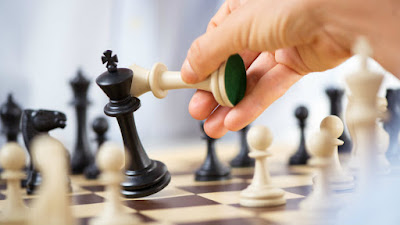 "The Chess Game"
by Paulo Coelho

"A young man said to the abbot from the monastery of Melk: "I’d actually like to be a monk, but I haven’t learned anything in life. All my father taught me was to play chess, which does not lead to enlightenment. Apart from that, I learned that all games are a sin."

"They may be a sin but they can also be a diversion, and who knows, this monastery needs a little of both," was the reply. The abbot asked for a chess board, sent for a monk and told him to play the young man. But before the game began, he added: "Although we need diversion, we cannot allow everyone to play chess the whole time. So, we only have the best players here; if our monk loses, he will leave the monastery and his place will be yours."

The abbot was serious. The young man knew he was playing for his life, and broke into a cold sweat; the chess board became the center of the world. The monk began badly. The young man attacked, but then saw the saintly look on the other man’s face; at that moment, he began playing badly on purpose. After all, he would rather lose, since a monk is far more useful to the world.

Suddenly, the abbot threw the chess board to the floor. "You have learned far more than was taught you," he said. "You concentrated yourself enough to win, were capable of fighting for that which you desire. Then, you had compassion, and were willing to make a sacrifice in the name of a noble cause. Welcome, because the secret of life is to know how to balance discipline with compassion.”