"Who Wins (and Who Loses) the Donald’s Battles?" 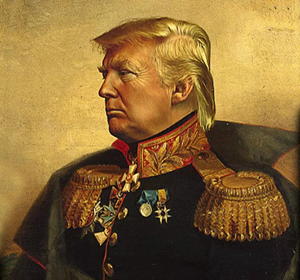 "Who Wins (and Who Loses) the Donald’s Battles?"
by David Stockman

"This is the Great Disruptor at war. He’s engaged on multiple fronts, most of them of his own making. It so happens that four of them have to do with the American economy. And there will be zero good outcomes from the strategies and tactics the Donald’s chosen to use. Indeed, he’s hastening the collapse of the entire edifice of American Empire.

Harm is already showing up on Main Street, of course. The Donald’s Trade War is, at the bottom line, an attack on the consumer. That’s because new tariffs on Chinese imports will result in higher prices at Wal-Mart Stores (NYSE: WMT) and on Amazon.com (Nasdaq: AMZN).

Meanwhile, a fixed wall on the southern border is a monument to human stupidity. It’s a solution to a problem that doesn’t really exist. And it creates more problems for the labor market. And this attack on immigrant labor comes at a time when the United States could use an infusion of young people ready to work. That’s not to mention the authoritarian overreach. Declaring a “national emergency” over a crisis Ann Coulter and Rush Limbaugh created is a dictator’s move.

The Donald also teamed up with the GOP and signed off on the $1.2 trillion Fiscal Debauch. It’s just another tax cut that didn’t pay for itself. But it still inflated the Warfare State. And the Welfare State isn’t getting any smaller, either. That’s why the federal debt is now more than $22 trillion… “Deficits don’t matter,” indeed.

This is an attack on U.S. solvency. And it is a top-down phenomenon – the Acela Corridor versus Main Street. The Donald has been made a patsy, firing off at the Federal Reserve as it tried “normalization.” But more “easy money” will harm savers and workers but help traders and speculators – and the “low interest man” in the White House. This is political combat, because the Donald only understands the economy through the stock market indexes. If Fox Business is up, he’s up… 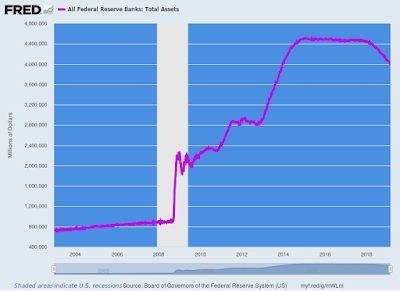 Click image for larger size.
Witness the Tweeter-in-Chief, this morning: "Since my election as President the Dow Jones is up 43% and the NASDAQ Composite almost 50%. Great news for your 401(k)s as they continue to grow. We are bringing back America faster than anyone thought possible!'

Now, he’s gotten what he wants from Chairman Jerome Powell: what seems to be an indefinite pause in the rate-hiking cycle. And our monetary central planners are, indeed, prepared to go even further than that. This is the existential threat, the one that undermines sovereignty at the most basic level.

As we discussed last week, “NIRP” – or “negative interest rate policy” – is on the table, courtesy of a new research paper from the San Francisco Fed. And, based on recent commentary from former New York Fed President William C. Dudley, get ready for more “quantitative easing.” What had been introduced as an emergency expedient to combat a 100-year flood has now become just another part of “normal” Fed policy: "The balance sheet tool becomes relevant only if the economy falters badly and the Fed needs more ammunition."

That’s one of the most terrifying statements ever from a Fed-head. That’s because large scale balance sheet expansion – quantitative easing – is not merely some kind of technical monetary “ammunition.” It’s nothing less than an epic, state-instigated financial fraud. It’s the ultimate case of “something” for “nothing.” It can’t go on forever."
- http://davidstockmanscontracorner.com/
Posted by CoyotePrime at 3:14 PM