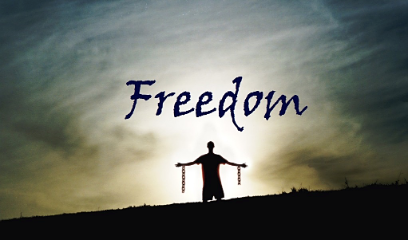 "And an orator said, “Speak to us of Freedom.”
And he (the prophet) answered:
At the city gate and by your fireside I have seen you prostrate yourself
and worship your own freedom, Even as slaves humble themselves before
a tyrant and praise him though he slays them.

Aye, in the grove of the temple and in the shadow of the citadel I have
seen the freest among you wear their freedom as a yoke and a handcuff.
And my heart bled within me; for you can only be free when even
the desire of seeking freedom becomes a harness to you,
and when you cease to speak of freedom as a goal and a fulfillment.

You shall be free indeed when your days are not without a care nor your
nights without a want and a grief, But rather when these things
girdle your life and yet you rise above them naked and unbound.
And how shall you rise beyond your days and nights unless you break the chains
which you at the dawn of your understanding have fastened around your noon hour?

In truth that which you call freedom is the strongest of these chains,
though its links glitter in the sun and dazzle your eyes.
And what is it but fragments of your own self you would discard that
you may become free? If it is an unjust law you would abolish,
that law was written with your own hand upon your own forehead.

You cannot erase it by burning your law books nor by washing the foreheads of your
judges, though you pour the sea upon them. And if it is a despot you would dethrone,
see first that his throne erected within you is destroyed.
For how can a tyrant rule the free and the proud,
but for a tyranny in their own freedom and a shame in their own pride?

And if it is a care you would cast off,
that care has been chosen by you rather than imposed upon you.
And if it is a fear you would dispel,
the seat of that fear is in your heart and not in the hand of the feared.

Verily all things move within your being in constant half embrace,
the desired and the dreaded, the repugnant and the cherished,
the pursued and that which you would escape.
These things move within you as lights and shadows in pairs that cling.
And when the shadow fades and is no more,
the light that lingers becomes a shadow to another light.
And thus your freedom when it loses its fetters
becomes itself the fetter of a greater freedom."

Freely download a PDF version of "The Prophet", by Kahlil Gibran, here:
- http://www.brainybetty.com/2007Motivation/
Posted by CoyotePrime at 4:53 PM