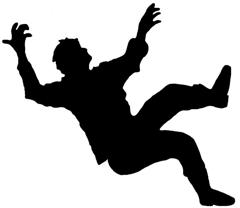 "The Wall Gave Way, and We Fell…"
By Bill Bonner

YOUGHAL, IRELAND – “Really… at your age… you should know better.” We had just come back from working on our derelict cottage on Sunday. We were recounting a heroic tale, with your editor as its leading man. We explained how we were setting roof rafters in place, walking along the top of the wall, when the wall gave way. We fell about 8 feet, but were unhurt.

All Fools: There are young fools. And there are old fools. But men are essentially all fools. They are designed by nature to do dangerous, difficult, and often, dumb things – to hunt, to fight, to race, to build, to compete for public office. Then, after the dust has settled, they sit around the campfire and tell tales.

“That place is unsafe. Anyone can see that. You should have cleaned it up and fixed the walls before trying to work on it. And you’re working by yourself…” Elizabeth was right about that. The plan was to put on a tin roof, fast. Then, under shelter, we would take our time to reinforce the walls and take out the debris. But it was a foolish plan. Nevertheless, we decided to stick to it. After a cup of coffee and a brief rest, we went back up on the wall and continued our work.

But now, it is Monday morning. And there’s a different kind of foolishness to reckon with. And different kinds of accidents, too.

Already in Recession: At the end of last week came word that the U.S. economy is growing strongly. Hozannah in the highest. But wait… what’s this?

Consumer spending was actually cut in half from the previous quarter? And Personal Consumption Expenditures are at a nearly five-year low? Business investment, too, fell from 5.7% in Q4 of 2018 to only 2.7% in Q1 2019? Private sector growth was the weakest in six years? And the only reason the number was so healthy – 3.2% – was because of inventories, imports, and government spending?

MarketWatch: "Final sales to private domestic purchasers have fallen three quarters in a row. Consumer spending has fallen three quarters in a row. Business investment is growing about one-fourth as fast as it was in the first quarter of 2018, when the corporate tax cut kicked in. The tax cut was supposed to supercharge the private-sector, and it did – for a few quarters.

One of the key indicators is the government’s calculation of inflation, which they say was less than 2% in the first quarter. The figure is unreliable. Real prices, paid by real people, are going up much faster. ShadowStats, which computes inflation the way the feds did it in 1990, puts the inflation rate at over 5%. If that were true, the U.S. economy is already in recession (nominal growth of 3.2% – 5% inflation = negative growth of 1.8%).

But though the feds’ inflation number may not give us much accurate information, the direction is telling. Inflation is not increasing; it is falling. This, too, signals weakness on Main Street.

Future Is Coming: The tax cut didn’t really cut the cost of government. It simply shifted it to debt… and onto the public and into the future. And now the future is coming into view. Spending is going down. Tax-cut savings have already been spent. The economy is slowing.

The idea of returning money to corporations – who got most of the tax cut – was that they would invest in new factories and new sources of wealth producing (including training and new technology). This “stimulus” would thus reverberate through the economy in new jobs and more output. Instead, corporations took the EZ money… and took the EZ way forward. They bought their own shares, thus creating little real growth on Main Street… but contributing to a fake boom on Wall Street.

This was just the latest installment of the whole, sordid “financialization” story. It causes businesses to forsake their real mission – satisfying customers by adding real wealth to the economy – in favor of EZ-money gimmicks and scams. It shifts money from Main Street to Wall Street. Mommas want their babies to grow up to work with money, not with steel, or wood, or oil.

Incomes in the elite, financialized economy go up, while the incomes of those who make real things and provide real services go down. Stocks rise, even though the businesses they represent stagnate. The economy appears to “grow,” even as most people become poorer. And the longer it goes on, the more the entire economy begins to weaken and bend, becoming more and more dependent on the fake money. Fake money produces a fake economy. But it produces real debt. Eventually, the debt bomb blows up.