"This Is the End of the Cycle"

"This Is the End of the Cycle"
by Charles Hugh Smith

"Everyone wants every cycle of expansion to last forever, but alas every cycle ends. The growth cycle that began in 2009 is finally coming to an end. The signs are everywhere, notwithstanding the torrid 3.2% GDP growth for the first quarter of 2019 (which as others have noted, is less than meets the eye.) Gross Domestic Product (GDP) is the standard measure of expansion, but it is an imperfect metric. GDP can still notch gains while the majority of the economy is stagnating and assets are losing value.

Better guides to expansion than GDP are sales volumes, prices, profits, wage increases and sustained rises in new enterprises and households. All of these measures of expansion are stagnant, indicating that monetary and fiscal stimulus are no longer moving the needle.

Corporate profits are higher as a result of accounting gimmicks, not soaring sales or expanding gross profit margins. Stocks are being pushed higher by the old trick of lowering earnings estimates so that corporations can "beat by penny."

In many once-hot real estate markets, sales are slowing while prices continued edging higher but at much slower rates than in the past. This is classic late-cycle activity: sales are declining as the pool of buyers has been drained while price increases have become marginal.

Global sales of pricey mobile phones and vehicles have slowed, indicating the exhaustion of the cycle is global. Again, this is classic late-cycle activity: trends that powered the narrative of "strong growth everywhere" are fading, despite attempts to hype some blip as a sign that strong growth is about to start up again.

As for the stock market: a blow-off top based on the misplaced confidence that strong growth is starting up again is also classic late-cycle action. The first doubts triggered the decline from October to December, and the sharp rebound this year once the Federal Reserve signaled "we'll do whatever it takes" is very typical of the late-cycle topping process: price sags as doubts emerge about the aging expansion, then notches a nominal new high to assuage everyone that the long-in-tooth Bull is starting another multi-year expansion. 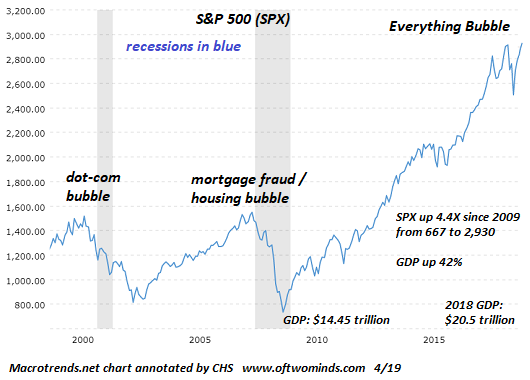 Those being paid to hype "the Bull market and the expansion will never end" narrative are experts at turning late-cycle blips into evidence that the cycle has plenty of room to run, but the more prudent observers are looking at the preponderance of evidence.

I touch on these dynamics in my recent interview with Greg Hunter: Today Looks Like Just Before 2000 Dotcom Crash.
- https://www.oftwominds.com/
Posted by CoyotePrime at 3:43 PM