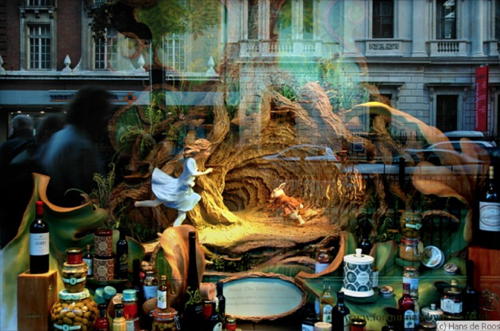 "How to account for Americans being the most anxious, fearful, and stressed-out people among the supposedly advanced nations? Do we not live in the world’s greatest democratic utopia where dreams come true?

What if the dreaming part is actually driving us insane? What if we have engineered a society in which fantasy has so grotesquely over-run reality that coping with daily life is nearly impossible. What if an existence mediated by pixel screens large and small presents a virtual world more compelling than the real world and turns out to be a kind of contagious avoidance behavior - until reality is so fugitive that we can barely discern its colors and outlines beyond the screens?

You end up in a virtual world of advertising and agit-prop where manipulation is the primary driver of human activity. That is, a world where the idea of personal liberty (including any act of free thought) becomes a philosophical sick joke, whether you believe in the possibility of free will or not. You get a land full of college kids trained to think that coercion of others is the highest-and-best use of their time on earth - and that it represents “inclusion.” You get a news industry that makes its own reality, churning out narratives (i.e. constructed psychodramas) to excite numbed minds. You get politics that play out like a Deputy Dawg cartoon. You get a corporate tyranny of racketeering that herds spellbound citizens like so many sheep into chutes for shearing, not only of their money, but their autonomy, dignity, and finally their will to live. 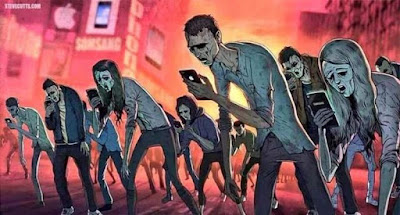 Can a people recover from such an excursion into unreality? The USA’s sojourn into an alternative universe of the mind accelerated sharply after Wall Street nearly detonated the global financial system in 2008. That debacle was only one manifestation of an array of accumulating threats to the postmodern order, including the burdens of empire, onerous global debt, population overshoot, fracturing globalism, worries about energy, disruptive technologies, ecological havoc, and the specter of climate change - things that hurt to think about.

The sense of gathering crisis persists. It is systemic and existential. It calls into question our ability to carry on “normal” life much farther into this century, and all the anxiety that attends it is so hard for the public to process that a dismaying number of citizens opt for suicide. There is no coherent consensus about what is happening and no coherent proposals to do anything about it. Bad ideas flourish in this nutrient medium of unresolved crisis. Lately, they dominate the scene on every side.

A species of wishful thinking that resembles a primitive cargo cult grips the technocratic class, awaiting magical rescue remedies to extend the regime of Happy Motoring, consumerism, and suburbia that make up the crumbling armature of “normal” life in the USA. The political Right seeks to Make America Great Again, as though we might return to a 1962 heyday of industrial mass production by wishing hard enough. The Left seeks the equivalent of an extended childhood for all, lived out in a universal safe space, where all goods and services come magically free from a kindly parent-like government, and the sunny days are spent training unicorns to find rainbows.

The decade-long “recovery” from the Great Financial Crisis of 2008 amounted to ten years of fake-it-til-you-make-it - with the prospect nil of actually making it to something like economic and cultural soundness. Are we too far gone now? Some kind of shock therapy is surely in the offing, and probably in the form of a violent financial readjustment that will alter the terms of getting and spending so drastically as to topple the matrix of rackets that masquerades as the nation’s business.

That financial shock has been coiling and coiling in the fantasyland that banking has become in the new zero interest rate regime where notions that pretend to be money get levered into new ways of destroying life on earth and the human project with it. At some cognitive level the people of this land sense what is coming and the wait for it is driving them crazy. Tom Petty was right: the waiting is the hardest part, and a hard way to learn that a virtual life is not an adequate substitute for an authentic one."
- https://kunstler.com/
Tom Petty & The Heartbreakers, "The Waiting"
Posted by CoyotePrime at 12:27 PM