"Why a Chernobyl-like Financial Disaster is Inescapable' 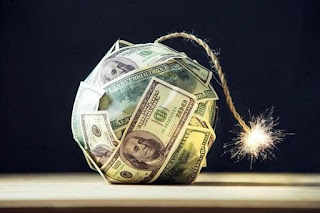 "Why a Chernobyl-like Financial Disaster is Inescapable'
by MN Gordon

"In the early morning hours of April 26, 1986 – roughly 33 years ago – things went horribly wrong in the town of Pripyat, in northern Soviet Ukraine. Reactor No. 4 at the V. I. Lenin Nuclear Power Plant, also known as the Chernobyl Nuclear Power Plant, was overwhelmed by an uncontrolled reaction. There was no stopping it.

Click image for larger size.
Chernobyl after the explosion (left) and today (right),
encased in a steel sarcophagus. [PT]

"Two initial explosions blew the top off the reactor. Once exposed, plumes of fission matter were wafted into the atmosphere by an open-air graphite fire. Before long, this radioactive material precipitated onto Western Europe and the Western USSR.

Nine days later the fire was finally contained. But not before an estimated 400 times more radioactive material was released than from the atomic bombing of Hiroshima and Nagasaki. * Twenty-eight firemen and operators died from acute radiation syndrome in the following days and months.

What exactly caused the Chernobyl disaster is still a matter of disagreement. The first official explanation of the accident was later acknowledged to be erroneous. But there is agreement on the fact that the nuclear disaster would not have happened when it did if the workers had played hooky and gone fishing. Instead, an ill-planned late-night safety test to simulate a power-failure set in motion the very chain reaction that led to the disaster. During the experiment, the emergency safety and power-regulating systems were both intentionally turned off. Then the operators attempted to boost the reactor output; a violation of the approved test procedure. Soon after, all control was lost…

A Moment of Silence: Most accounts we’ve come across assign equal blame to human error and reactor design flaws. The shortsighted engineers failed to idiot proof the nuclear power plant for the operators. The operators succeeded at being idiots. Should we expect anything different?

Here at the Economic Prism we’re zealot aficionados of disaster – especially the human induced variety. Hence, on the anniversary of the Chernobyl disaster, we take a moment of silence for disasters past, present, and future. We also scratch for an inkling of tutelage that we can squirrel away like a silver eagle for a time in need.

Another point clarified by the Chernobyl disaster is that humans are fallible. They’re prone to making big mistakes. Some of these mistakes are attributable to sloppiness. But many result from conceit and misperception of the limits of human control.

The Chernobyl operators thought they had a novel idea for how to boost reactor output. Yet to test their idea, they had to turn off the emergency safety and power regulating systems. They also had to attempt to operate the reactor in ways inconsistent with its design criteria. Without question, they should’ve known better. But, remember, these are humans we’re talking about. Even the most judicious among us will go mad from time to time… always with the best of intentions.

The main take-away from the Chernobyl disaster is that people frequently think they are better, smarter, and more capable than they are. Moreover, they often charge forward with little more than misplaced beliefs in unfounded theories and ideas. These adventures in madness nearly always end in disaster.

Indeed, a nuclear power plant is a complex system. Still, an economy is infinitely more complex. Actions and reactions throughout an economy take place in varying and unpredictable ways. They are subject to spontaneous moods and social phenomena, which change over time – often without rhyme or reason.

An economy cannot be designed and constructed like a nuclear power plant, or other physical systems. So, too, an economy is much too large and multifaceted to be planned and improved upon like a wedding planner arranging a large reception. But that doesn’t stop central planners from attempting to control and operate the economy and financial system like Chernobyl operators in the early morning hours of April 26, 1986.

The 2008-09 financial crisis and great recession were man-made failures. What’s more, the solutions that have been executed over the last decade have been guided by guesses derived from flimsy theories and wishful ideas.In other words, monetary policies, like the ill-fated Chernobyl test, have been a wild ass central banker experiment.

Ben Bernanke, the chief architect of it all, is a complete lunatic – what readers from our home state of California would call a 5150. His insane QE, ZIRP, Operation Twist, and NIRP, have taken us past the point of no return. QT and a neutral federal funds rate are unattainable. Similarly, fiscal policies have taken debts and deficits to a place of sheer insanity, where they can never honestly be paid off. 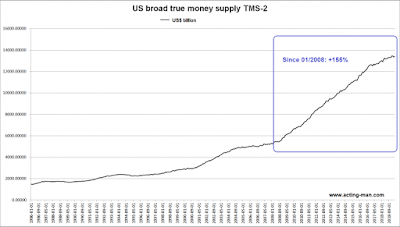 Click image for larger size.
US broad true money supply: up ~USD 8.15 trillion or 155% since early 2008´-
the largest money supply inflation of the post WW2 era. This isn’t going to end well. [PT]

Yet unlike a nuclear reactor meltdown, the feedback loops from these monetary and fiscal experiments are indirect, can appear dormant for many years, and are impossible to fully understand and account for.  What is clear, however, is that the only way out of this predicament is a Chernobyl-like financial disaster; an economic meltdown and vaporization of the existing financial order. An uncontrolled reaction has been set in motion. There is no stopping it."
- https://acting-man.com/?p=54297
◆
* Speaking of radiation... welcome to extinction.
"Updated April 27, 2019: Fukushima Equals 19,188.75 Hiroshima Bombs
Today, More Tomorrow; There is No Place On Earth to Escape the Rad"
Posted by CoyotePrime at 6:45 PM