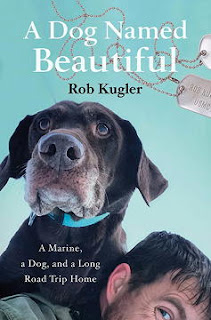 "In September of 2016, Rob Kugler got some terrible news about his beloved dog, a black lab named Bella. The bone cancer that had taken her left front leg just a year earlier had spread to her lungs and mouth. Her already terminal illness was threatening to cut her short, eight-year-long life even shorter. 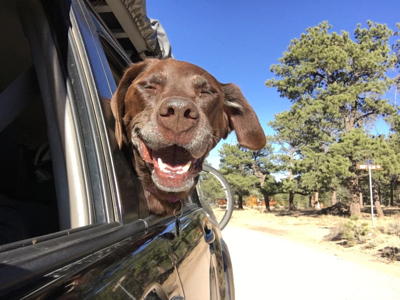 Kugler, a former Marine staff sergeant struggling with his own demons, refused to accept the death sentence and decided to take his canine best friend on an epic cross-country road trip. For Kugler, the trip was about much more than Internet fame. When he saw photos of himself and Bella in some new city, he saw a version of himself he barely recognized anymore. “My head is held higher than it’s been in a while,” he writes. “Bella’s face looks confident, and my face looks confident too — and it hasn’t looked that way for a long time.”

The invisible third passenger on their journey was Kugler’s deceased older brother Mike, a fellow Marine killed in Iraq in 2008 when his convoy hit a roadside bomb. He was Kugler’s hero, and the reason he enlisted at all. Even worse, he was stationed just 40 miles away from Kugler in Iraq, and Kugler had reason to believe his brother was en route to see him when he was killed.

The guilt, Kugler admits, has been crushing. His long goodbye with Bella helped Kugler reconcile what he never had a chance to do with his brother. “Losing Mike changed my whole perspective,” he told The Post. “You realize how precious time is. Bella’s diagnosis was awful but it was also a gift. I wasn’t able to be there for Mike at the end, to tell him how much he mattered to me, but I could be there for Bella.” 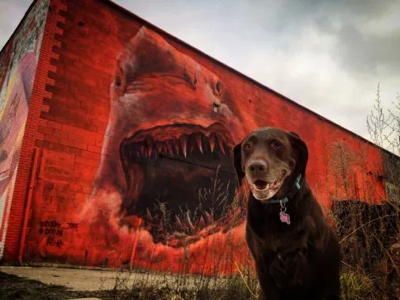 Bella poses next to her favorite graffiti in Detroit.

It pushed him to do all the things he would’ve otherwise put off till tomorrow. “I learned to treat every day like it’s my last on Earth,” he says. Along his journey, he and Bella visited several retired military friends — many of whom, just like Kugler, have dog companions of their own. It didn’t surprise Kugler, who says vets find a connection with dogs they can’t get with other non-military civilians.

“You can have a relationship with another human being, but they still have their own lives,” he says. “Even in a marriage, they have something else in their world besides you. But with a dog, you’re it. You’re their everything. Their lives are all about being with you. Those are the kind of bonds you form when you’re in the military. And it’s not like that anywhere else.” 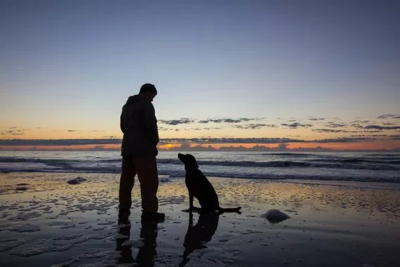 Bella and Kugler take in the sunrise at a beach in North Carolina.

Bella died in October 2016, and remembering that day still makes Kugler emotional. “I don’t know if I can talk about this,” he says, his voice breaking. “She was wagging her tail right up until the end.” Kugler remembers lying in the grass with Bella just days before she passed and daydreaming of Mike, in which he told his late brother that Bella would be joining him soon. “Mike reassure(s) me he’ll watch her until I get there,” Kugler writes of his vivid dream. “I hand Mike Bella’s pink leash.”

Two and a half years later, Kugler still feels an absence. Not just of Bella, but the sense of purpose that came with their aimless road trip. “One of the hardest parts of a trip like that is what to do next,” he told The Post. “It’s almost like being in the Marines and having this monumental, life-changing experience, and then coming home and everything just… stops.”

Today, he lives in Oregon and he still hasn’t figured out what he wants to do. He works odd jobs and donates his time to veteran causes while figuring out his next move. He’s also met someone — a woman named Kristen who found him after following his and Bella’s journey on Instagram and who also traveled around the country with her own dying dog, a golden retriever named Franklin Waffles. They’ve moved in together and have adopted two border-collie puppies, Max and Jasper, whom Kugler affectionately calls “my boys.”

But still, the guilt lingers. For his brother. For Bella. “I don’t want to wallow in the sorrow, which is so easy to do,” Kugler says. “It helps to have the boys running around the house. I feel more disconnected from the feeling that death is always around the corner. Now I’ve got the feeling of, oh my gosh, there’s so much youthful energy here. We’ve got years of this to look forward to.”

Hat tip to Stucky at The Burning Platform
- https://www.theburningplatform.com/
Posted by CoyotePrime at 1:26 PM