“That Collapse You Ordered?” 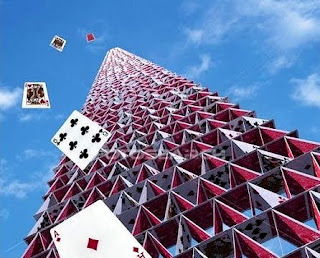 “That Collapse You Ordered?”
by James Howard Kunstler

"I had a fellow on my  podcast last year who insists that the world population will crash 90-plus percent from the current 7.6 billion to 600 million by the end of this century. Jack Alpert heads an outfit called the Stanford Knowledge Integration Lab (SKIL) which he started at Stanford University in 1978 and now runs as a private research foundation. Alpert is primarily an engineer.

At 600 million, the living standard in the USA would be on a level with the post-Roman peasantry of Fifth century Europe, but without the charm, since many of the planet’s linked systems - soils, oceans, climate, mineral resources - will be in much greater disarray than was the case 1,500 years ago. Anyway, that state-of-life may be a way-station to something more dire. Alpert’s optimal case would be a world human population of 50 million, deployed in three “city-states,” in the Pacific Northwest, the Uruguay/Paraguay border region, and China, that could support something close to today’s living standards for a tiny population, along with science and advanced technology, run on hydropower. The rest of world, he says, would just go back to nature, or what’s left of it. Alpert’s project aims to engineer a path to that optimal outcome.

I hadn’t encountered quite such an extreme view of the future before, except for some fictional exercises like Cormac McCarthy’s "The Road." (Alpert, too, sees cannibalism as one likely byproduct of the journey ahead.) Obviously, my own venture into the fictionalized future of the "World Made by Hand" books depicted a much kinder and gentler re-set to life at the circa-1800 level of living, at least in the USA. Apparently, I’m a sentimental softie.

Both of us are at odds with the more generic techno-optimists who are waiting patiently for miracle rescue remedies like cold fusion while enjoying re-runs of "The Big Bang Theory." (Alpert doesn’t completely rule out as-yet-undeveloped energy sources, though he acknowledges that they’re a low-percentage prospect.) We do agree with the basic premise that the energy supply is mainly what supports the way we live now, and that it shows every evidence of entering a deep and destabilizing decline that will halt the activities necessary to keep our networks of dynamic systems running.

A question of interest to many readers is how soon or how rapid the unraveling of these systems might be. When civilizations crumble, it tends to fast-track. The Roman empire seems to be an exception, but in many ways it was far more resilient than ours, being a sort of advanced Flintstones economy, with even its giant-scale activities (e.g. building the Coliseum) being accomplished by human-powered work. In any case, the outfit really fell apart steadily after the reign of emperor Marcus Aurelius (180 AD).

The Romans had their own version of a financialized economy: they simply devalued their coins by mixing in less and less silver at the mint, so they could pretend to pay for the same luxuries they had grown accustomed to as resources stretched thin. Our financialized economy - like everything else we do - operates at levels of complexity so baffling that even its supposed managers at the central banks are flying blind through fogs of debt, deception, and moral hazard. When that vessel of pretense slams into a mountain top, the effects are likely to be quick and lethal to the economies on the ground below.

In our time, the most recent crash of a major socioeconomic system was the fall of the Soviet Union in 1990-91. Of course, it happened against the backdrop of a global system that was still revving pretty well outside the USSR, and that softened the blow. Ultimately, the Russians still had plenty of oil to sell, which allowed them to re-set well above the Fifth Century peasant level of existence. At least for now. The Soviet Union collapsed because it was a thoroughly dishonest system that ran on pretense and coercion. Apparently, the US Intel Community completely missed the signs that political collapse was underway.

They seem to be pretty clueless about the fate of the USA these days, too. If you consider the preoccupations of two recent Intel chiefs - John Brennan of CIA and James Clapper, DNI -who now inveigh full-time on CNN as avatars of the Deep State against the wicked Golden Golem of Greatness. Personally, I expect our collapse to be as sudden and unexpected as the USSR’s, but probably bloodier because there’s simply more stuff just lying around to fight over. Of course, I expect the collapse to express itself first in banking, finance, and markets — being so deeply faith-based and so subject to simple failures of faith. But it will become political and social soon enough, maybe all-at once. And when it happens in the USA, it will spread through the financial systems the whole world round."
- http://kunstler.com/
Posted by CoyotePrime at 9:31 AM