"Seen one galaxy, seen 'em all? Not on your life: The Hubble Space Telescope has captured lots of fantastic pictures of spiral galaxies during its 20-plus years of operation, as you can see in our lineup of "Hubble's Greatest Hits." But I have a feeling that today's image of the galaxy NGC 4911 will be joining the hit parade. This jewel and the other gems in the setting are part of the Coma Cluster, a gathering of galaxies 320 million light-years away from Earth in the northern constellation Coma Berenices. You can make out the wispy tracks of NGC 4911's outer spiral arms, which are being pulled out by the gravitational tug of the neighboring galaxy just to the right (known as NGC 4911A). In today's image release, the Hubble Heritage team says that the material stripped away from the central spiral will be dispersed throughout the galaxy, fueling the creation of new stars. 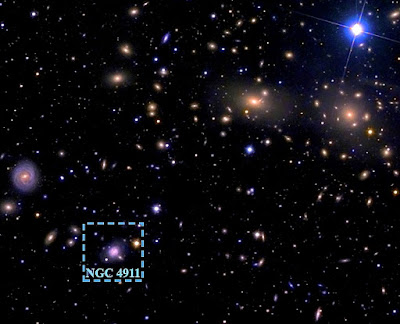 Click image for larger size.
The cluster is home to nearly 1,000 galaxies in all - and the gravitational interactions involving all those galaxies spark starbirth galore. In NGC 4911, you can see the sparkles of newborn star clusters sprinkled amid iridescent pink clouds of hydrogen. And if you look closely at a higher-resolution view of the scene, you'll spot dozens of galaxies in the background where that story of creation is being repeated countless times.

This picture is the result of 28 hours' worth of exposures made over the course of three years, using Hubble's Wide Field Planetary Camera 2 and the Advanced Camera for Surveys. Some of those exposures were made in 2006 and 2007, before the ACS broke down and the WFPC2 was replaced. Others were made in 2009, after the ACS was fixed and WFPC2 was replaced by Wide Field Camera 3. All those exposures were put together for the Hubble Heritage project. For more pictures from the new, improved Hubble, check out our slideshow of latest, greatest Hubble hits.
- http://cosmiclog.msnbc.msn.com/
○
• "Two Trillion Galaxies, at the Very Least"
• "93 billion light-years in diameter."
Posted by CoyotePrime at 5:40 PM