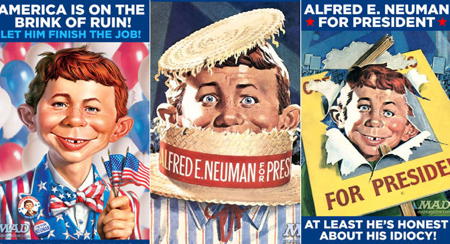 "Alfred E. Neuman Has Set the Price"
by David Stockman

"Did you know that the U.S. Treasury posted a $207 billion deficit for May? That’s a record. It also reported spending of $440 billion for the month. That’s also a record. And it brought the rolling 12-month deficit to just shy of the trillion-dollar mark at $986 billion.

It so happens that May marked month 119 of the current expansion. That tied it with the 1990s cycle for the longest on record. Even by the lights of hardcore aggregate-demanders of the last century, fiscal deficits are supposed to be falling sharply – trending toward surplus, even, as they did in 1999 and 2000 – at the end of a business cycle.

Our deficit is erupting toward 5% of gross domestic product (GDP). And J.M. Keynes himself is rolling in his grave… 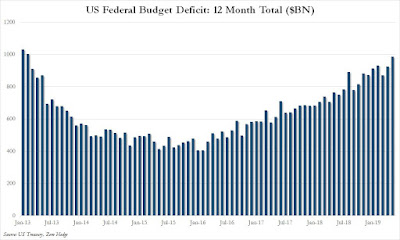 It’s the sordid sort of profligacy that leaves an empire vulnerable to ambitious – or just simply vengeful – challengers. And our military-industrial-surveillance complex is really, really good at inspiring/developing/manufacturing plenty of both kinds all over the world.

You only need check in on the Tweeter-in-Chief’s feed to name major potential malefactors: China… Iran… Russia… They’re all freighted with drama and consequence; that last, though, makes for some fascinating irony, of course, and some instruction. The fact of the matter is that Imperial Washington and the Kremlin – whatever you may believe or not believe about Russiagate – are moving apart on things like global cybersecurity standards and practices. It’s something to keep in mind. The risk is “Forever War” metastasizes – and times-ending technology proliferates – faster than we can get rational.

But, first things first… Right around the time those debt-and-deficit data were emitting, The Wall Street Journal ran a front-page story, "How Washington Learned to Love Debt and Deficits." Here’s the money-quote, for those who’d like to be spared a click-through, courtesy of the current Chairman of the House Budget Committee: “There haven’t been any cataclysmic consequences, so why worry about it?”  That’s the kind of “low interest man” stuff we expect from the Donald – in fact, when confronted with the prospect of the debt crisis blowing up, he said, “Yeah, but I won’t be here.”

Of course, that’s John Yarmouth, Democrat from Kentucky, joining the President of the United States and Alfred E. Neuman on the “What, Me Worry?” Mount Rushmore. Presidential Medal of Freedom “winner” Arthur Laffer and whomever we can pin its mutation “modern monetary theory” on can share the fourth spot.

Indeed, there’s never been such bipartisan complacency about the nation’s public finances. That includes the borrow-and-spend binges of FDR as well as LBJ and 38 through 44. That Journal piece covers all the rationalizations, non-sequiturs, double-talk, and statist tommyrot. What’s most telling, however, is that it was co-authored by Jon Hilsenrath. Hilsenrath’s the Journal’s longtime Federal Reserve reporter. The cool kids call him the “Fed Whisperer.”

But that “debt and deficits” story has not a single word about the role of central banks in fostering the utter collapse of fiscal responsibility it describes. So, here you go…

Global central banks have expanded their balance sheets by about $22 trillion since the turn of the century. They’re monetizing the erupting public debt of the U.S. and most of the rest of the world via fiat credit. 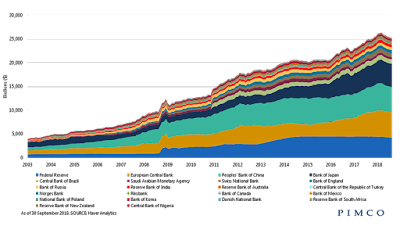 The consensus they’re trying to generate – from the Laffer Curve to Modern Monetary Theory – is that indefinite, virtually infinite levels of public debt can be monetized. That amounts to one epic free lunch proposition, that no one need save because monetary central planners can always create new credit, easy as that.

Cheap money has fostered a foolish belief in Imperial Washington that debt is benign, that borrowing a trillion dollars at the tippy-top of the business cycle is no sweat at all. Well, we’re eating our seed corn, is what we’re doing. We’re killing private savings to fund fiscal excess, with the public debt going from $5.5 trillion to $22 trillion. In another 10 years – once we start pricing in the impact of the Baby Boom on the Welfare State – it’ll be $42 trillion. That’s growth of eight times in 30 years.

The economy is already struggling to grow – it’s the longest but also the weakest expansion ever. And the private economy has 50% less in real terms to invest in future productivity and growth than it had two decades ago.

It’s the worst set of circumstances at the worst possible moment in history. And there’s going to be a day of reckoning."
- http://deepstatedeclassified.com/
Posted by CoyotePrime at 1:59 PM