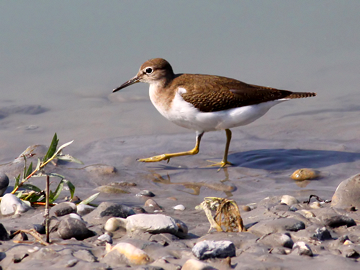 “Elizabeth Bishop has a poem about a sandpiper, a tiny shore bird scurrying forward and reverse with the lick and ebb of the tide. It was not the sandpiper I thought of today as I walked the beach, but the sand with which the Bishop's bird is seemingly obsessed. The last two lines of the poem:

"The millions of grains are black, white, tan, and gray,
mixed with quartz grains, rose and amethyst."

Everyone sees the sandpiper. Who could not? Those fluttering feet. The delicate engine of its controlled frenzy. But who sees what the sandpiper sees, the grains of sand between its toes? The poet, that's who. It is the poet's ability to see the world in a grain of sand– black, white, tan, and gray- that is her gift. And more! Rose and amethyst. And I mean "gift" in two senses. The gift of her talent (who was the giver? nature? nurture?).  And her gift to us of the poem.

I want to have that gift, in both senses. The second sense is easy enough: I need only read. The poem is there, in black and white. The first sense is more problematic. How does one learn to see, to see not only the obvious, but also the obscure. The subtle. The ephemeral. The dim. Is it a gift you are born with, or a practice to be learned? To see the world in a grain of sand, and eternity in an hour?"
" The world is a mist. And then the world is
Minute and vast and clear…”
- http://blog.sciencemusings.com/
•
“Sandpiper”
by Elizabeth Bishop

“The roaring alongside he takes for granted,
and that every so often the world is bound to shake.
He runs, he runs to the south, finical, awkward,
in a state of controlled panic, a student of Blake.

The beach hisses like fat. On his left, a sheet
of interrupting water comes and goes
and glazes over his dark and brittle feet.
He runs, he runs straight through it, watching his toes.

- Watching, rather, the spaces of sand between them
where (no detail too small) the Atlantic drains
rapidly backwards and downwards. As he runs,
he stares at the dragging grains.

The world is a mist. And then the world is
minute and vast and clear. The tide
is higher or lower. He couldn't tell you which.
His beak is focussed; he is preoccupied,