"How to Keep Emotions From Running Your Life" 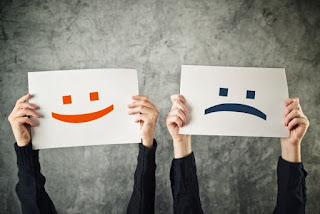 "How to Keep Emotions From Running Your Life"
by David Cain

"The worst period of my life ended shortly after I made a key discovery: most of the difficult experiences in my life arose directly from my desperate need to avoid difficult experiences. At the time, I was flunking in school. I was a bad student because I avoided asking for help or revisiting concepts I hadn’t grasped the first time. I avoided those things precisely because they made me feel like a bad student. It was a perfectly self-defeating strategy, but of course I didn’t realize what I was doing until later.

I had inadvertently made certain emotional experiences- in particular, the feeling of being seen as incompetent- so unacceptable that I’d do anything to avoid them, which is precisely why they continued to dominate my life. The light came when I discovered a simple principle that’s sometimes described as “exposure therapy”. You experiment, a bit at a time, with letting yourself feel the things you’re afraid to feel, and watch them lose their power over you.

We Think About Our Feelings So That We Don’t Have to Feel Them: I was a particularly hard case, but we all do this to some extent. We empower certain difficult emotions by trying to never feel them. The effect can snowball until it becomes crippling.

Desperately avoiding the experience of embarrassment, for example, leads to habits of extreme shyness. This only further stigmatizes embarrassment, and stunts the social skills that can prevent it or mitigate it. Shyness seems, at first, like a reasonable defense against embarrassment, but it only makes it into a looming specter that controls your life.

Avoidance has a way of empowering the thing you’re avoiding. We suffer this effect in more subtle ways too. Today, because entertainment is so readily available, we’ve become almost entirely unwilling to feel boredom. We grow more indignant over delays and technical glitches than our parents and grandparents did. We pull out our phones dozens of times a day, and get anxious when the battery is low. Because we limit our exposure to boredom, it’s more painful than ever, and we’re needier than ever for ways to fend it off.

Experiences that we seldom have tend to be more destabilizing when they do happen. A Floridian who recently moved to New York will suffer more from a cold day than native New Yorker will. Still, there’s no point in seeking out difficult experiences we can reliably avoid. Avoiding hangovers will make you less prepared to deal with one gracefully when it does happen. But that doesn’t really matter if you’re in a position to never let them happen.

The avoid-at-all-costs strategy works against us, though, when it comes to inevitable human feelings like uncertainty, awkwardness, fear, and disappointment. These are universal, recurring experiences. None of us can live free from these feelings, no matter how badly we’d like to, so any given one will control your life to the extent that you see it as a completely unacceptable experience.

When these kinds of feelings do appear, instead of allowing ourselves to feel them, we often make one last desperate effort to avoid the experience: we think about why we shouldn’t be feeling them. The mind puts together a case about why this feeling shouldn’t have occurred. If you’re feeling uncertainty or anger or embarrassment, something must have gone wrong in the universe. The mind starts searching for who’s to blame, what so-and-so should have done, how you never get things right, how the world has been corrupted by corporations or bad people- some kind of explanation for why you should not have to experience these very normal feelings.

Ostensibly we do this to solve our problems, to identify offending parties and decide on our responses. But if you examine this kind of rumination, it’s obvious the motive isn’t to figure out what to do next, but to argue that this latest unpleasant emotional experience shouldn’t be happening at all. However, if you decline the bait, instead playing the brilliant chess-move of letting yourself feel the feeling, you might find something surprising: an unpleasant feeling tends to lose its venom shortly after you decide you don’t need to avoid it. It doesn’t stick around long once it has nothing to fight for.

How Freedom is Made: I’m convinced now that most of the barriers in our personal lives come from the absurd habit of trying to never feel certain totally normal, inevitable human feelings. Our insistence on complete safety from certain undesirable emotions only makes them more destabilizing when they do happen. Trying to live a life free of your least-favorite emotions is a perfect recipe for neurotic and addictive behavior. In college, I made an unenforceable rule that I must never feel embarrassment, and it basically made my life into a gushing fountain of embarrassment.

We can work on expanding our willingness to feel the full range of human emotion, and when we do, we gradually become more free. It’s really a matter of bringing curiosity, rather than combativeness, to the less-sexy aspects of the human experience. Uncertainty, for example, is nobody’s favorite feeling, but you’re a lot more free if you know how to manage it gracefully.

This is why I will advocate meditation until the day I die. It’s essentially a bit of time you set aside daily to simply meet your experience, whatever it is. You set up the simplest, least threatening situation possible- you, sitting still, noticing what it currently feels like to sit still. You are setting aside, for a short part of the day, your impossible mission to always feel a certain way.

Often these sessions are quite pleasant. But over time, you will be visited by all of the less-popular experiences: boredom, nervousness, soreness, restlessness, fatigue, excessive warmth, excessive cold, dampness, cravings for french fries and a thousand more.

In a very gentle and forgiving way, you see what happens when you allow yourself to simply have these experiences as they come. And you find that for the most part they’re not that bad- at least not as bad as living in fear of them- and that they don’t stay long unless you fight with them. When you stop trying to ban certain feelings from your experience, they tend to pass through relatively easily, in a matter of minutes or even seconds, and nothing is harmed.

Think of it this way: be with nervousness now, and you permanently shrink nervousness’s ability to control your life. Same with fear, boredom, restlessness, anger, indignation, disappointment, clinginess and everything else that’s difficult about being human. It is hard to overstate how liberating this practice can be over time. Life begins to feel a lot safer, because you’re always expanding the range of experiences you can live with. The more you let yourself feel a given feeling when it does visit you, the less trouble it is for you, forever.”
- http://www.raptitude.com
Posted by CoyotePrime at 10:15 PM