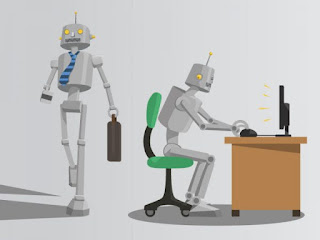 “Leisure Unsought, Neural Networks, and Other Dramas”
Why We Will Soon Be Eating Each Other
by Fred Reed

“Today, FOE will explain economics, fraud, unemployment, and the end of the world. There will no longer be a need for economists, if there ever was. You will understand everything. FOE is that sort of column.

Long ago, everybody worked on farms, growing food. This was a real service. People wanted food. They liked to eat it. At the same time, there was a tremendous demand for refrigerators and cars. People didn’t know they wanted these things because they hadn’t been invented. But they wanted them anyway.

Then farming automated, so everybody went to work in factories, making the refrigerators and cars, which they now had the money to buy. These products were not as important as food, but reasonably important.

Then the factories automated, so everybody started nail salons or tanning spas. Well, only some started them. But employment followed Fred’s Law of Declining Utility. People who didn’t have nail salons became lawyers, PR executives, professors and diversity consultants. These usually had no utility at all, but they kept their practitioners from being obviously unemployed. This, the prevention of evident pointlessness, became more and more central to the economy. Thus psychotherapy, grief counseling, and pet grooming.

Along the way, there flourished other means of keeping people off the job market without anyone’s noticing. Universities expanded, warehousing in custodial care millions of young who had neither interest in education, the intelligence to undertake it, nor much idea what it was. Then came the student-loan scam, the moral equivalent of sharecropping, that both facilitated students’ isolation from workaday reality. It also provided a steady stream of money for banks.

Child labor laws kept the small supply of actually needed jobs from predation by millions of children who previously had been sweated in factories. High schools prevented adolescents from doing anything useful. This followed the same principle of hiding unemployment.

A vast military and its associated industries absorbed further people who had nothing to do. Here declining utility reached zero and actually went negative. The military produced nothing of value, unless you valued dead people, and the generals might as usefully be employed in digging holes and filling them in.

An unsettling backdrop to all of this was the realization that the public, whose buying of things it didn’t need kept the system going, didn’t really want to buy enough stuff. Left to themselves, they would barbecue pork chops in the backyard, drink Bud, and watch movies with lots of gratuitous violence. They didn’t know they wanted iWatches or funny-looking tennis shoes or designer jeans. Since you can’t base an economy entirely on frankfurters, somebody had to tell them to buy, buy, buy. In short, to keep the wheels of industry turning they had to be force-fed like paté geese, and so were.

Advertising became a bigger industry than most it shilled for. The ad biz was a desperate economic measure. It kept busy in factories the workers employed making things nobody really wanted while they awaited replacement by robots. Of course robots don’t buy things, which would eventually be important, but Americans don’t think of “eventually” if it is more than two weeks away.

By this point it became difficult to hide more unemployment. As semi-literate sociology majors came out of pseudo-universities to work at Starbucks, they dimly realized that something was wrong. Living on tips for the rest of their lives while living in Mommy’s basement was not exactly employment as they had imagined it.

Here was the new, and profitable, economic paradigm of semi-pseudo-sorta-kinda-but-not really employment: barely paid, no medical coverage, no benefits, no future, but you still got to pay taxes to make it even less. Somewhere in there, women had shooshed onto the job market, driving wages down. Now you hire help at half price.

Finally, panting, we come almost to the end of the list. True, there are still the welfare population, whom the government craftily leaves out of the unemployment figures, and imagination-assisted disability rolls of people with undetectable back injuries, but enough. Paid unemployment is still unemployment. We have reached– drum roll, trumpets– Saturation Joblessness. No more non-work can be hidden under the bed or stuffed behind the sofa cushions.

And artificial intelligence has arrived. This might be a good thing in the increasing absence of any other kind, but maybe not. Anyway, AI is bringing on a sharp increase in Preemptive Replacement For example, new robotic factories and Amazon warehouses will fire no one, but hire no one either. Law firms will use software that can do legal research in minutes, and with fewer errors, that would take a paralegal weeks. The victims will sense that they have somehow been had, but not quite see how. This will somewhat hide growing unemployment, though not ameliorate its social effects.

So we come to the neural networks (you haven’t forgotten them, have you?). Now if you grew up programming in, say, FORTRAN, neurocomputing seems really squirrely, but it works. It does things like face recognition and reading x-rays and evaluating loan applications and detecting credit-card fraud better than humans. Not sexy jobs. In fact, horribly boring. Still, lots and lots of people do them, and usually hate them.

(An excellent book on the subject, is “AI Superpowers: China, Silicon Valley, and the New World Order.” It completely avoids the mathematics. By Kai-Fu Lee, a very heavy hitter in AI who has worked with most of the big names both in the US and China.)

Unlike robots, which have to be manufactured, bought, and installed in thousands, neural software can be distributed around the world in seconds, and upgraded as quickly. Middle management will be gutted. Kids coming up will not realize why there aren’t as many office jobs as before.

Now, as businesses adopt AI and its cousins and siblings, as they will and are, there will not be enough Starbucks to absorb the resulting surplus of semi-literate sociologists. Drinking coffee will become a patriotic act. Social unrest, already incubating like early-stage tuberculosis, will grow. Why do you think we have ghastly suicide rates among the unemployed Deplorables in Middle America–these deaths being almost celebrated by the coastal elites? What brought Trump in?

Of one thing we can be sure: Nobody in power is going to do anything about it–not the government, not businessmen, not corporations (GM just moved 4500 more jobs, I think it was, to Mexico), not the Bezozes or the Zuckerbergs or Wall Street. In the words of the great Reverend McBilly Osfeiser, of the Pure Word and Saturday Night Dumplings Baptist Church, “I say unto ye, Brothels and Cisterns, the End Times is upon us. Grab your shotguns, stock up on sour mash, and barricade the doors. It’s gonna be Hell.”
- http://www.unz.com/
◆
R.E.M, “End Of The World”
Posted by CoyotePrime at 2:42 AM