“The Federal Reserve Will Inflate the Economy Further” 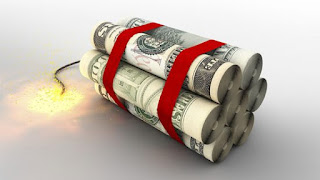 “The Federal Reserve Will Inflate the Economy Further”
By Bill Bonner

“One may say that, apart from wars and revolutions, there is nothing in our modern civilizations which compares in importance to [inflation]. The upheavals caused by inflations are so profound that people prefer to hush them up and conceal them.”
– Elias Canetti, “Crowds and Power”

PORTLAW, IRELAND – Instead of revisiting the peak, yesterday, the Dow took a few steps back down the mountain. What happens next is anybody’s guess. But the picture we’ve been sketching out is a doozy. It shows that no matter what the Dow does… no matter what the headlines or the pollsters tell us… the deeper cycle is on a downward slope. It has been since 1999.

Rendezvous With Destiny: And it will probably continue until it finally reaches its rendezvous with destiny. That’s when fear reigns supreme… and hope, optimism, and faith in the future have been crushed down to historic lows. We’ll know when that moment comes by watching our Greed/Fear gauge, which measures the relationship between stock prices and gold. People invest in stocks when they think everything is hunky dory (greed). They go for gold when they worry that things aren’t so hunky or so dory (fear).

When the Greed/Fear gauge goes below five (when you can buy all the Dow stocks for less than five ounces of gold)… the point of maximum anxiety – Peak Fear – will be at hand. Then, you’ll be able to buy almost any stock you want for only about a quarter (we’re talking in real money terms… measured in gold) of what you would pay now. Houses, too, should be only about half what they cost today. And bonds? Don’t be surprised to find that most of them will be worthless by then. That’s what inflation does to bonds. It wreaks havoc.

Crackpot Idea: But you’re probably protesting… “There is no inflation.” Or maybe you think “Inflation is no threat.” Or “A little inflation is a good thing.” If so, you are wrong. Inflation has already done trillions of dollars’ worth of damage to the U.S. economy. And if the picture we’re seeing is correct… that is just the beginning. So… let’s look at how it works.

“Inflation” refers to an increase in the supply of money. People use it colloquially to refer to consumer price increases. But increasing the supply of money doesn’t necessarily increase consumer prices. It depends on where the money goes and how it gets there. Following each of the two bubble blow-ups this century, the feds decided to “stimulate” the economy with fake money. The whole idea was crackpot from the get-go. Fake money (money that no one earned or saved) can never produce real growth.

Feds’ Choice: In 2008, the feds had a choice. If they wanted to stimulate the economy, they could use monetary policy (lowering interest rates… and using quantitative easing (QE) to buy bonds). [By buying bonds, the Fed forces down yields and interest rates across the economy. This, in theory, would lead to more spending and investment.]

Or they could use fiscal policy. Instead of buying bonds, for example, they might have taken their $3.6 trillion QE program and used it to send taxpayers a rebate check. Each taxpayer could have gotten a check for about $27,000 – tax free, of course.

Or instead of frittering away money on wars, crony pay-offs, and zombie giveaways over the last 10 years, the feds could have divided up $11 trillion of deficits, too. This would have given each taxpayer about $85,000 more. Talk about stimulus! The money would have been almost immediately spent on consumer items. The economy would have boomed.

Inflate or Die: Of course, this boom, too, would have been fake. And it would have ended as soon as the fake money stopped flowing. That is the insight embedded in Richard Russell’s dictum: Inflate or die. Once you have a fake-money boom going, you can only keep it going by giving it more fake money. Otherwise, it dies.

When you pump money into the economy via the monetary channel, you raise prices for stocks, bonds, and property. When you pump it via the fiscal channel, consumer prices rise. Typically, they rise slowly at first. Then, they rise fast. And then, you either “pull a Volcker,” in which you get ahead of inflation by radically tightening credit (former Fed chair Paul Volcker put the federal funds rate up to 20% in 1980)…
…or, you let inflation run. In 2008, with inflation as high as 5.6% and the federal funds rate running close to 4%, the feds took the monetary road. They inflated. But they inflated Wall Street’s financial economy, not Main Street’s consumer economy.

Fed Turnaround: But the “inflate or die” rule still applies. The only way the feds can keep the Wall Street boom alive is to inflate more. That is the real meaning of the Fed’s turnaround. Fed chair Jerome Powell has paused his rate hike program, and is now looking at more cuts. The Fed has to inflate the financial sector with more cheap credit, or the boom will die.

Volcker made his choice. He decided to kill the fake boom himself. Then, with inflation on the run, a real boom could begin. And now, Powell has made his choice, too. He will not “pull a Volcker.” He will go with more inflation. First, the Fed will try to inflate the financial markets further. When that fails, it will inflate the consumer economy, too – funding higher and higher deficits with more and more fake money.
Yes, we’re on our way… to Venezuela… Argentina… and Hell. Whee!

Tomorrow, we’ll look at how we get there.”
- https://bonnerandpartners.com/
Posted by CoyotePrime at 5:25 PM