"The Object of Iran" 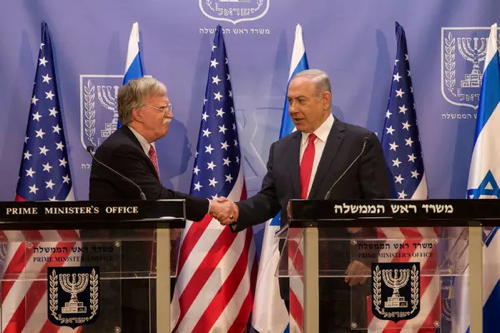 A picture's worth a thousand words, it is said. Right, Bolton? You too, Pompeo...
So eager to fight Iran... to the last American.
"The Object of Iran"
by David Stockman

"When we do finally strike Iran, it’ll be because John Bolton and Mike Pompeo have elected officials like Tom Cotton, a Republican from Arkansas, who’ll stand up in the United States Senate and say stuff like this: "Democrats are trying to tie the hands of the Commander-in-Chief and our troops as they face down Iran. They want Congress to debate how to respond while American forces are at risk."

It’s straight-up demagoguery. And this “tie the hand of the Commander-in-Chief” line is scripted for Fox & Friends and their No. 1 fan. Of course, it’s not hard to push the Donald’s buttons. The foundational reality is that Imperial Washington is the aggressor vis a vis Iran right now. It’s a dangerous confrontation. It’s also utterly unnecessary. That’s far more important to understand than any momentary dispute about whether a Japanese oil tanker got hit by an Iranian mine or an incoming projectile of uncertain origin.

Bolton and Pompeo have been in heavy war heat for years. Indeed, the working hypothesis, with help from Max Blumenthal, should be that the “Gulf of Oman Incident” will join a long list of false-flag operations and manufactured casus belli… Remember the Maine, Operation Northwoods, Gulf of Tonkin, Kuwaiti incubator babies, Saddam’s WMD’s, Qaddafi soldiers’ Viagra spree, Last Messages From Aleppo, Douma, burning aid on Colombia-Venezuela bridge…

Whatever it is that goes down on waters in and around the Persian Gulf, the Strait of Hormuz, and/or the Strait of Hormuz will happen because: the U.S. Fifth Fleet naval and air war machine is all over the place; and, Imperial Washington has crushed Iran with sanctions designed to close the global market to its oil exports and suffocate its domestic economy to the point of collapse. Iran represents zero threat to the security of the American homeland. It doesn’t even threaten Asia or Europe. The Fifth Fleet shouldn’t even be there.

Iran has no blue-water navy that could even get to the Atlantic Ocean. Here’s what it has:

• 18,000 sailors, including everyone from admirals to medics;
• an aging, decrepit fleet of planes, with no long-range flight or refueling capabilities;
• ballistic missiles that mainly have a range of under 800 miles;
•a limited air defense capability based on a Russia-supplied S-300 system (and not the far more capable S-400);
• and a land army of less than 350,000, which puts it on level terms with Myanmar.

The Islamic Republic’s defense budget of less than $15 billion amounts to just seven days of spending based on the Pentagon’s $750 billion spending plan. Iran’s military budget today is actually far less even in nominal terms than what it was under the Shah, way back in the late 1970s… when we were paying for it. 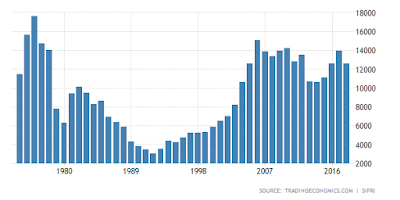 Click to Enlarge
In inflation-adjusted dollars, Iran’s military spending today is less than 25% of what it was prior to the 1979 Revolution. Whatever the foibles of today’s Islamic Republic, a theocratic state, a thriving military power it is not.

The world doesn’t need an empire to keep the small-fry likes of Iran and its peers in line. But, look, “military threat” and economic stability have absolutely nothing to do with it.

Imperial Washington has Main Street’s best knee-deep in harm’s way because of a misguided notion that the Persian Gulf is an American lake. More broadly, Imperial Washington acts as if it has the right to control Iran’s foreign policy.

Missions like protecting oil-supply lines and regulating engagements between what amounts to a two-bit power and its own two-bit neighbors is global authoritarianism. It’s Empire First. And it puts America’s real security last."
- http://deepstatedeclassified.com/
Posted by CoyotePrime at 6:08 PM