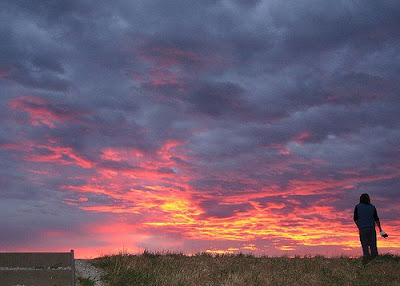 I am just going to let this speak for itself. It is a beautiful, heart-breaking piece written by Andy Alt, about his father, who died by his own hand when Andy was just eight years old...- CP

“For every joke he tells, there is a sadness. Each sadness buried by one joke. Once he thought the joke transformed the sadness, but the joke merely blanketed the sadness to comfort it.
It’s said that tears clean one’s eyes. If the the dam broke from all of the tears from his sadness — crying an ocean over the loss of his father, the loss of his child-hood, the loss of what-could-have-been-but-never-will-be, what he never knew, what he’ll never know, feelings he’s never felt, feelings he’ll never feel, a father he can never know, nor the father who can ever know his son, a father who can never be proud of his son, a son who can never be proud of his father, a voice he’ll never hear, a father who will never hear the voice of his son, the son who can never have his father, the father who can never have his son, the life that never was, a life that never included a father, the life of a father that isn’t — if the tears for all these were shed, he could throw away his glasses and have perfect vision. And the tears would wash over his soul and clean the taint of blood and terror. All emotions, love, hope, happiness, sadness, fear, and many others, would be uncovered and laid out — existing, coexisting peacefully upon the cool sheets of time and the future.
A trickle of these tears were shed this night, for the death of a father over two decades past, and the death of a son over two decades past, each only happening yesterday. As the tears fall he could for a moment sense and feel what the father felt at the time of his death, and then the son shed even more tears for the pain which the father felt at the moment the father’s finger was upon the trigger. The son could almost feel the father’s presence, and the son reached out his hand, but there was no hand to take it. He told the father that he missed and loved him, and that he knew the father missed and loved him as well.
And I realized that I do indeed have a father, but he is dead. Some of the sadness now uncovered, the tears dry, the ink falls from my pen, and I see that I’ve written about the loss of two men.”
- http://mentaldimensions.wordpress.com/
Posted by CoyotePrime at 8:44 PM