“The Only Thing Necessary for Evil to Triumph Is…” 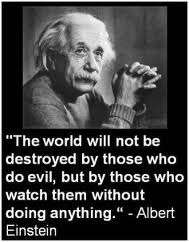 “I’m betting that most of my readers can complete this phrase. The problem is, it isn’t quite true. Edmund Burke, its supposed source, was a good man, but that doesn’t make the saying true. Here’s the complete passage, in the form most of us know: "The only thing necessary for evil to triumph is for good men to do nothing."

Yes, there is a time when good men and women must stand up for what’s right, even when it involves risk, but that moment comes only after evil has already been well established and is powerfully on the move. Fighting evil may be an essential thing, but it isn’t the first problem— it matters only after thousands or millions of mistakes have already been made. And if those first mistakes had not been made, great fights against evil wouldn’t be necessary.

Where Evil Comes From: Let’s begin with a crucial point: Evil is inherently weak. Here’s why that’s true: Evil does not produce. It must take advantage of healthy and effective life (AKA good men and women) if it’s to succeed. Evil, by its nature, is wasteful and destructive: It breaks and kills and disrupts, but it does not produce and invent. Evil requires the production of the good in order to do its deeds.

The truth is that evil survives by tricking the good into doing its will. Without thousands of basically decent people confused enough to obey, evil would fail quickly. The great tragedy of our era is the extent to which evil has been successful in convincing people to service it. Good people having yielded their wills arm evil, accommodate evil, and acquiesce to its actions.

Hannah Arendt summarized it this way: "The sad truth is that most evil is done by people who never make up their minds to be good or evil."

People end up supporting evil because they don’t want to make up their minds at all. They want to avoid criticism and vulnerability, so they hold to the middle of the pack and avoid all risk. These people wouldn’t initiate murders by themselves, but in the name of duty, loyalty, unity, and/or the greater good, they cooperate with evil and give it their strength. But each plays a small part—none of them stretches so far that they’d have to contemplate the final effects of their actions.

In the 20th century, however, the actions of such people led directly to the murders of 260 million people. And they did this precisely by avoiding decisions… by merely obeying.

Sins of Obedience: People think of murder, lying, and robbery as sins, but none of those has nearly the death toll of obedience. Basically decent men and women obey agents of evil for very mundane reasons. The process often goes like this:

• Being confused and intimidated, they look for the center of the pack.
• They try not to make waves.
• They learn that they can avoid making waves best if they adopt the perspectives of their overlords. So they run the overlords’ slogans through their minds as a default program.

In the end, these people don’t make up their minds. Rather, they take on the minds of their overlords and do their will. And so, the vast majority of evil done on Earth traces back to minds and wills that have been abandoned to fear and laid on the Altar of Obedience.

So… This is what the famous quote should say:
The only thing necessary for evil to triumph is for good men to obey.
We should be painting that saying on our walls."